What are the stories behind the months’ names? - Stillman Translations 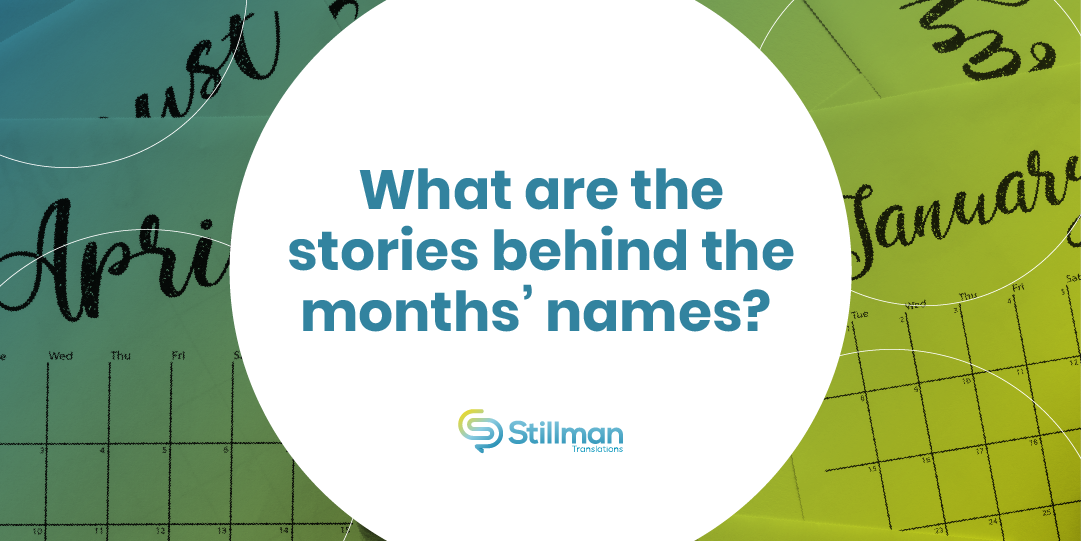 What are the stories behind the months’ names?

It’s September already! Have you ever thought about why we call it “August”? We’ll give you a hint: it’s the Romans’ fault. Their devotion to gods and emperors has left its mark on the way we speak about many things, including our months. And learning some of the stories behind the months’ names is just like watching a Roman soap opera.

The calendar we use today is called “Gregorian” after Pope Gregory XIII, who very modestly decided to name it after himself after requesting that an astronomer called Calvius correct a flaw in the previous calendar. The resulting amendment, also called “civil” or “new style” calendar, is the now the standard, but it’s not the only system we have had. In fact, it’s not even the best. For example, some may argue that the Mayan calendar is more accurate than the Gregorian one, as it tracks the movement of the sun, the moon and several stars with such precision that they had no need to include a leap year.

If world history had been different and the Mayan civilization had developed in Western Europe instead of Central America, perhaps we would have very different names for our days and months. “Today is galactic serpent day,” would be something we might find ourselves saying. But the Mayan Empire collapsed due to a great drought, and the Romans were more strategically located, so our months are named after Roman gods, emperors and festivals.

The name August comes, in fact, from an emperor called Augustus. He was the adoptive son of the famous Julius Cesar, who had already named the previous month – his birthday month – after himself (July). So, Augustus followed the family tradition and he picked a lucky month in matters of state and war, for us to remember him by. Other emperors followed this interesting way to claim power, but for some mysterious whim of oral tradition, those names didn’t stick.

At first, there were only 10 months

In the beginning, the calendar was comprised of only ten months, from March to December, with all except the first 4 being named after their order numbers. So, in this period, before it became fashionable for emperors to name months after themselves, July was called Quintilis, which means “the fifth month,” and August was Sixtilis. And this trend was the origin of the names September, October, November and December – the seventh, eighth, ninth and tenth month.

January and February were added at a later date, under the Roman names of Ianuarius and Februarius. It was Numa, the second king of Rome, who decided Janus, the god of beginnings and transitions would be the right god to honor at the start the of year. The name Ianus also derives from the Latin word for door, so this god was considered the “gate keeper of heavens.”

Februarius, on the other hand, refers to februum – translated as purification – and it was assigned to a yearly time in Roman tradition where the city would prepare for spring by conducting purification rituals. This is perhaps the most curious part of this story, as the ritual was in fact a festival in which naked men wandered the city “playfully,” whipping women with goat-skin strips. Interesting way to cleanse! This festival became so popular even a god was named after it.

The reasons why March, April, May and June were exceptions to the numbering system are rather ambiguous. Twenty centuries have past, so some loss of information is to be expected. Tradition says the first king of Rome, Romulus, named March his father Mars, the god of war, because this was when war activities resumed every year, after the winter pause.

In fact, Mars was the first of the ten original months in the calendar, until Numa decided to include January and February at the beginning of the calendar. This pushed the rest of the months to later in the year, but even when the original order changed, the names of September through December did not. This explains the inconsistency in calling them the seventh to tenth months, when they are in fact the ninth, tenth, eleventh and twelfth.

The stories of how April, May and June got their names are a little hazy

One of the versions about April, which was also named by Romulus, is that it derives from the Latin word aperio, which means “open.” This refers to the “opening” of spring blossoms. According to a different etymological theory, however, the name Aprilis referred to the ancient Greek goddess Aphrodite. Regardless of what the real explanation may be, the fact is April has kept its original name since the beginning of the first Roman calendar.

As for May and June, the reasons for their names – originally Maius and Iunius – are also varied and unclear. As with almost everything Roman, gods – or rather, goddesses – are involved. Maia is the goddess of earth and nature, which may be related to the start of spring in the Northern hemisphere. Juno was the Roman goddess and protector of women. However, it is also possible that these two months refer to the Roman social division into elder and junior citizens, respectively.

Hazy or not, these events which occurred millennia ago, are still very much alive in our daily lives. Had even a slight detail been different during those years of devotion to gods and rituals, and we might be using a completely different calendar. This is a powerful way to reflect on what our heritage will be for generations to come. Will our generation have such a long-lasting impact as the Romans?