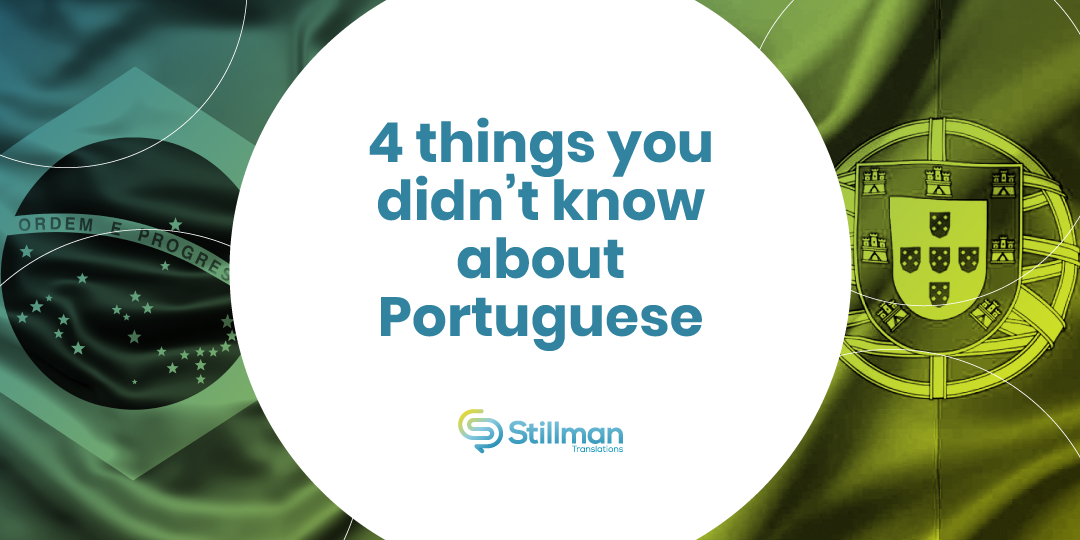 4 things you didn’t know about Portuguese

One of the most spoken languages in the world, Portuguese has countless layers of colorful history and meaning. Have you ever wondered why it shares its roots with Spanish, but its rhythm sounds more like Russian? Continue reading to discover this and a few other interesting facts you didn’t know about the Portuguese language.

What is the Portuguese language a mix of?

The roots of the Portuguese language are based in Galicia, a region in the northwest of Spain. And, just like Spanish, it is the result of an organic evolution of Latin – brought by the soldiers of the Roman empire – with some influences from other languages spoken prior to the Roman domination.

In the Middle Ages, this developed into what linguists refer to as “Galician-Portuguese”, a single language which eventually split into the two languages we know today. Galician and Portuguese are very similar in phonology (sound), morphology (spelling), lexicon (dictionary) and syntax (sentence structure). In fact, speakers of Galician and European Portuguese can still understand each other perfectly!

Portuguese also has a lot of Arabic influence, due to the Moor occupancy of the Iberian Peninsula up until the 13th century. However, its influence is considered to be solely lexical, which means the Arabic didn’t alter the language structure, but left several of its words as heritage. Some examples are: almofada (cushion), azeitona (olive) and garrafa (bottle).

Similar to the accent differences between American and British English, Portuguese has also developed differently on each side of the pond. While you may not hear it if your Portuguese isn’t advanced, Brazilian speakers tend to sound a little more “musical” than their European counterparts. Phoneticians describe the latter accent as being softer, perhaps because people from Portugal speak with their mouths a little more closed.

Another big difference in the Brazilian accent is the use of the second person pronoun “você” instead of “tu”. They both mean a singular “you”, but if you were Portuguese, você would sound like a formal and distant form of address. It is the word you would use when speaking to an elder or stranger, perhaps even your boss. Instead, you would use the word “tu” more informally, for a friend or a closer connection. Brazilians normally use você for informal and, sometimes, formal situations.

Interestingly, even though the Brazilian accent is newer than its European ancestor, the word você is actually the contraction of a formal greeting from monarchy times: vossa mercê (“your mercy”). Also, Brazilians have a tendency to use terms from 18th- and 19th-century Portuguese. Regardless, we tend to consider Brazilian Portuguese to be more informal and modern. Perhaps another case of “vintage” becoming “cool”?

If you speak Russian, you may have had the experience of overhearing Portuguese speakers in the street and confusing their language with Russian. If so, you are not alone, as this type of confusion is common for many Russians and speakers of other Slavic languages. As we have seen from the history of the Portuguese language, there aren’t any roots – that historians have recorded – linking the two languages. So, this type of mix-up is perplexing for many.

Some experts have explained this by highlighting that both Russian and Portuguese are stress-timed languages, which makes their intonation sound very similar, but only in rhythm. A stress-timed language involves uttering stressed syllables at approximately regular intervals. Unstressed syllables therefore take a shorter time to be said, so that they adjust to this rhythm. Stress and rhythm are independent elements from words and their meaning, and they can be similar from language to language, even when the lexicon is entirely different.

The fact that Portuguese and Russian follow this same melodic pattern can confuse native speakers of both languages. There are other similarities, such as nasal pronunciations and the frequent use of the “sh” sound – especially in Brazilian Portuguese – which can also be the cause of this confusion between such distant languages.

Portuguese is part of the Romance family

If we were to place Portuguese in a family tree, we would see its actual relatives are the Romance languages. (And no, they are not called Romance because they are romantic!) It is hard to say exactly how many there are, but the most spoken ones are Spanish, Italian, Portuguese, French and Romanian.

Their common ancestor is Vulgar Latin, the language of the Roman soldiers during the spread of the Roman Empire. And of course, this is the reason behind their family name: Romance. Just like Portuguese, each of those languages then developed as a mix of the native, pre-Roman tongues and the colonizing Latin. This explains why their grammar and vocabulary are quite similar.

Such an interesting and beautiful language! Now you know 4 new things about Portuguese.