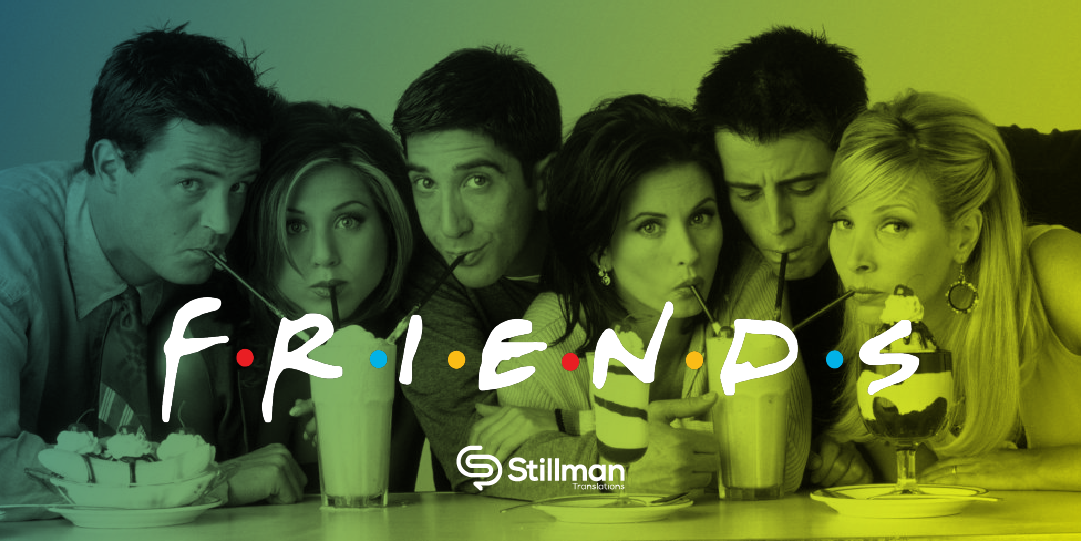 Friends reunion: a sneak peek into Subtitling and Dubbing

The Friends reunion special sparked a craze in fans all over the world. Friends has gained a cult status where, no matter the age, it’s enjoyable. The memory of a story that continues to be significant worldwide owes credit to its original idea, the cast and the script writers. However, to reach so many cultures and countries, subtitling and dubbing must have played its part. Or not?

The series follows the intricate story of six friends living in Manhattan, New York. This group is made up of an array of hilarious characters, among which anyone can find reliability, or their own best friend.

This story, portrayed so comically, has reached and impacted many cultures. There is a high chance that if you travel to the other side of the world and start to sing “So no one told you life was gonna be this way…” it would be followed by at least one person doing the *clap clap clap clap *. I bet you even sang it in your head.

Friends is a mix of observational comedy, seemingly incongruous surprise elements, sarcasm, and perfectly-timed punch lines. The characters are witty and quick on the comeback, and a large and dedicated team of writers worked on including taboo topics and allowing jokes about surrogacy, same-sex marriage and infidelity to be made without being offensive.

Comedy is at the heart of every sitcom, making it similar to any other typical television show, meant to entertain without requiring the audience to think. However, the concept behind it is anything but mundane. They subtly raise and question social norms, conventions and generic rules, under the guise of simple, light comedic entertainment. This two-layered concept makes it an entertaining genre for everyone. Those viewers who do not catch the underlying social criticism can still laugh at the joke, while those who watch the show more critically will appreciate it even more.

Did you know that the first-ever televised sitcom was the British production Pinwright’s Progress? It was on the air from 1946 to 1947. Many more came along over the years, with ups and downs as the taste of the viewers moved from comedy to more narrative shows and back.  Still, sitcoms focused primarily on family life. Friends was the first sitcom to change course and center on friendship.

Friends has influenced fashion with the “Rachel” haircut and replicas of the Central Perk found all over the world, from England to Egypt and Japan. What’s more, the sitcom has influenced language itself. Sali Tagliamonte and Chris Roberts, both professors of linguistics at the University of Toronto, conducted a study on the use of intensifiers in Friends and came to the conclusion that it has influenced the use of intensifiers within the American and British population. Before Friends, “very” was the most commonly used intensifier in England, while “really” was most popular in the United States, and both were equally popular in the Canadian language area, whereas in the Friends data, “so” is by far the front-runner, representing nearly half of all the intensifiers used. The study revealed that, while the show was on, the use of “so” was accelerating among the youngest generation. They came to the conclusion that media language not only “reflect[s] what is going on in language”, but also influences and shapes the general population’s use of language.

Translating humor presents one of the most problematic issues within the area of translation. It is most unlikely to find the same pun in two languages with exactly same meaning. Ideally, a translator should provide an identical equivalent, i.e. maintaining the ‘formal equivalence’ as well as the ‘functional equivalence.’

Those who understand English and Spanish, check out this inaccurate subtitling from the 9th season:

For your project not to flunk but rather become the next most popular movie, video game or series, here are some of the factors to take into account in the process:

For example, the Arena Synchron Berlin company, responsible for the German dubbing of the show, has been critiqued for the poor quality of the translation, which resulted in the loss of many of the comical references.

In short, achieving the best subtitling and dubbing standards professionally opens a pathway into a worldwide audience and an impact beyond the screen. If you have a subtitling or dubbing project, you can count on us! We are here for you!

Vierrether, Tanja. Cultural and linguistic issues of sitcom dubbing: an analysis of “Friends”. Avaliable on: https://etd.ohiolink.edu/apexprod/rws_etd/send_file/send?accession=bgsu1494865832944617