How to tackle humor beyond borders: from topics to grammar Stillman Translations 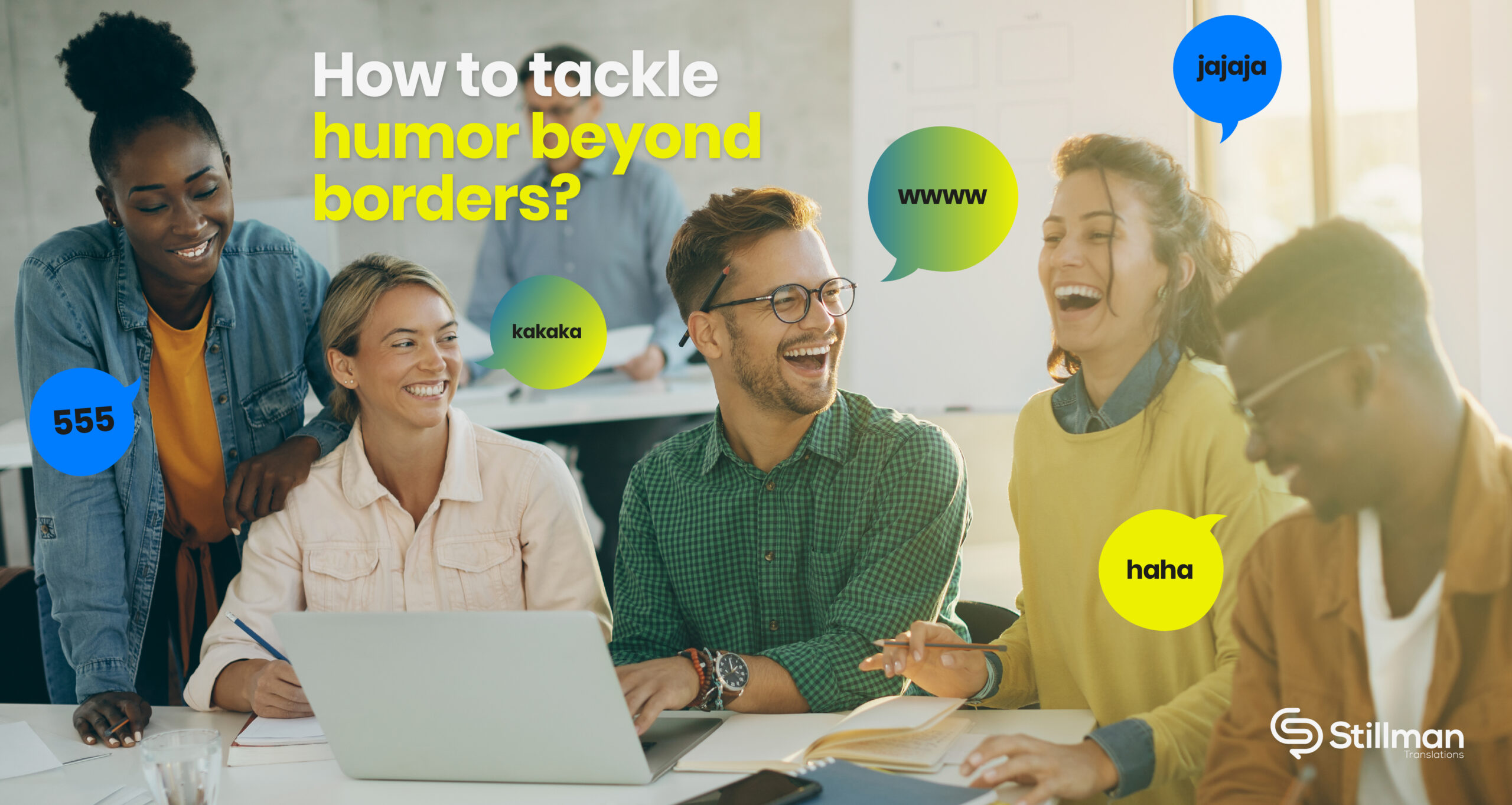 How to tackle humor beyond borders: from topics to grammar

Humor doesn’t work the same in all countries. It’s present in our everyday life, in our business life and in relationships with clients.

Humor doesn’t work the same in all countries, but language experts can help.

When do we first get humor? A child, even a baby, can laugh. But it’s only when we turn nine or ten that we begin to consciously manipulate language in order to achieve a humorous effect. This language play is called “metapragmatical” manipulation. And it explores humorous effects in various contexts.

Breaking the ice. Setting an amicable mood. Even when answering an email. Humor is present in our everyday life, in our business life and in relationships with clients. Even during conferences and live speaking. It’s a way of connecting with the audience.

But it’s not a straightforward matter. Some topics are seen as taboo in some countries, while in others they might be considered funny. Even laughs, which seem to be universal, are written differently in each language. In Thai you might read “555” instead of “haha”. In chinese “wwww” and in Brazil “kakaka”.

Why is this? How does it vary and what should we pay attention to? And how can a language expert make you nail the ice breaker that starts any good relationship with a client? Here are some quick wins and data on humor translation.

The skills and barriers

From entertainment to advertisements to business relationships. From movies to products and transmedia campaigns. The translation of humor by language experts is often necessary.

Some are universal. Knock knock jokes are somewhat recognizable everywhere. But others are very culturally dependent. It could be tied to very niche cultural and linguistic contexts.To understand why England jokes about weather, you need to actually know what the weather is like there. If not you might miss a laugh.

This leaves translators and interpreters with the task of translating humor that is, at times, impossible to translate. At least not without some loss to its original.

So, a language experts needs to be very sharp on:

Especially when it comes to real time translation, where every word is final. And all the while, the language expert has to measure and balance if the joke is benign (harmless, inconsequential, not important) or malicious. Sometimes it’s both, and most humor lies there. But a lot of tact is required. What is acceptable in one city may be  wrong in another.

Even more so, there is something called active culture, which is a person’s unique outlook, shaped by their individual life experiences. If this is a tête-à-tête, it becomes very important. Who is the client or speaker? What was their life experience like? It helps avoid unfortunate comments.

There are four types of puns that can cause difficulties in the translation of humor.

And they present different types of difficulties when spoken out loud or written down.

On ink, because sometimes a proofreader will overlook this. And it requires an attentive audience, since maybe the joke will lie in how the word is pronounced, though what they read makes perfect sense. This happens in a certain book, for example, by Miguel Ángel Campos who writes a chapter called “Lawyers, great lawyers, and liars”. His jokes are based on the underlying assumption that lawyers are liars. But the proofreader did not replace “lawyer” for “liar” in the text, and the text was left jokeless, though perfectly coherent. And if this were to be translated into another language, the joke would be most likely left out altogether.

It’s also a problem when public speaking in more than one language. Word play and puns can be lost in translation. The same happens with allusion, verbal irony,  subtle uses of humor, and cultural references. When in writing, one can look for equivalences. But in real time, one finds oneself in a pickle.

So what are the options? A language expert may invent jokes that cater to the new target-culture. The language expert may have to rewrite the wordplay in a way that works in the target language. And sometimes, if push comes to shove, a language expert can joke about how they can’t find a way out. And say something along the lines of “the speaker told a funny story. Please laugh.” Which has happened before, more than one. And it’s a tactic that has been many times well received, leaving the crowd burst into laughter.

This leads us to the crucial role of interpreters in simultaneous interpretation. There are at least three primary challenges in translating humor in conferences:

It’s a given that the faster a speaker talks, the more difficult it would be to perform language interpretation. And the way the joke is delivered is no minor detail. Not every speaker is a good jester.

Professional interpreters practice interpreting humor across cultures. They study and have at hand similarities in the target language. They know local idioms and expressions. And they adapt to more and less formal environments. If the setting is serious and the joke is too complicated to interpret, they might explain and summarize the joke instead of translating it. It might not offer the same comic relief, but it will ensure the meaning is conveyed.

Also, always remember there are two ends (at least) to translate during real life interactions. If the person being translated laughs, a good interpreter will explain why the person is laughing. This way, everyone is in the loop on what’s going on and no one is left out.

How to read a laugh

Finally, imagine you’re writing a book that will be translated. Reading a work email. Portraying a texting situation in a commercial. How should people laugh?

In Arabic a written laughter may read “hhhhhhh”. Mainly because in Arabic, people don’t write short vowels like ‘a’. They’re implied.

In Farsi, the “kh” consonant is used. So this is the equivalent of laughing with “kha-kha-kha”.

This list goes on and on. In Japanese laughs go ‘www’. In theory the ‘w’ shortens from the Japanese word for ‘laugh’ which is ‘warai’. As the joke gets funnier, so do the number of w’s. And in Thai, the number five, is pronounced ‘ha’. So you might stumble upon a ‘5555’.

There are also acronyms. Much like English has “LOL” or “LMAO”. French for example has ‘MDR’, which stands for “mort de rire” which translates to “dying of laughter”.

The bottom line is, whichever language you choose. Whatever your preference on humor is. We have a language expert who can help at Stillman.