Language as a bridge to the right to communication - Stillman Translations 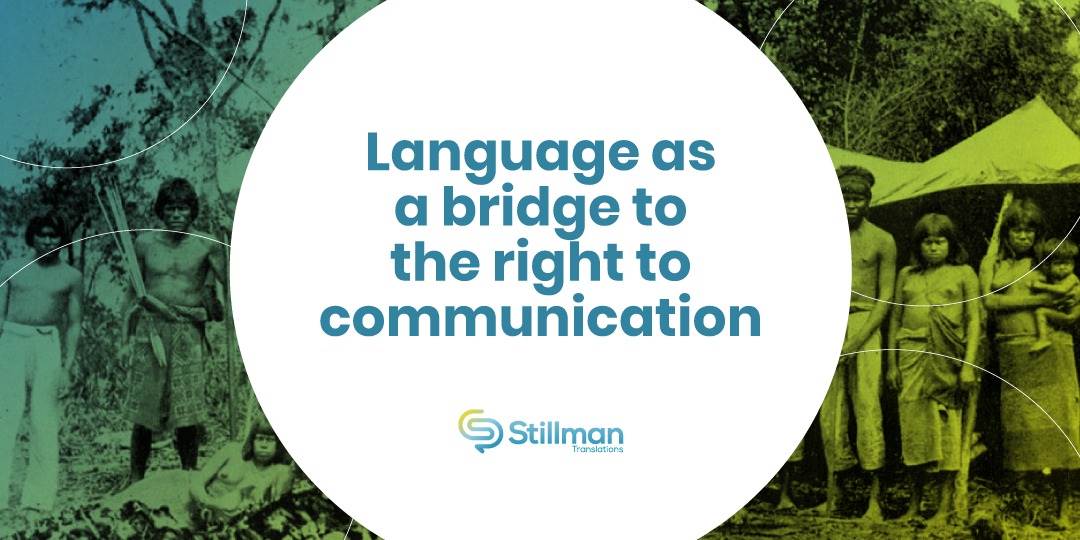 Language as a bridge to the right to communication

Melisa Mariel Sotelo is a journalist who has researched on the aboriginal peoples from northern Argentina. She has been related and committed to them throughout her entire life.

The language of these peoples often goes unnoticed, despite the fact that the Argentine Constitution ensures their inclusion, in practice this does not always happen. Language is a bridge to guarantee the communication and participation of every person who is part of a territory or nation.

For this journalist, language can be understood as a way of seeing and capturing senses and transmitting them, and also a way of manifesting the feelings and the emotions. Language carries out within itself the musicality and beliefs of a culture. For this reason, to have genuine communication, it is necessary to understand that languages that cohabit in a territory, in which they are spoken, are the links that allow communication to take place.

In the province of Chaco, where she is from, in addition to Spanish there are other three languages spoken. However, Spanish remains as hegemonic, which means that the language of the colonizers has prevailed and predominates in the region.  This situation implies that those who do not speak Spanish cannot actively participate as political agents and are not aware of many of their rights.

As a conseqence of this situation, a large part of the population that should be benefited from public policies does not get to know what the State does for them. There is a systematic violation of the right to communication. Interpreters fulfill a fundamental role, becoming that necesary bridge to make communication and inclusion possible, but they are not always available in all areas of public spheres.

The languages of the aboriginal peoples from Northern Argentina

There are mainly three peoples in the northeast of Argentina: wichís, qom, and mocovíes.

However, the language that predominates in the management of public life and society in general is Spanish, which is the language of the colonizers. Colonization processes continue in force through practices of denial of cultural diversity. This affects directly the authentic fulfillment of democracy.

Nevertheless, according to Sotelo “more things are being constantly done to expand rights from different angles. Nowadays, indigenous peoples occupy more places in the democratic representation (in the lists for the legislative elections). Also, there is a hard work that has been done related to bilingual intercultural education, which includes: the publication of bilingual books, the promotion of ancestral crafts to assure its circulation, and also the recovery of their worldviews and history. Indigenous people themselves are starting to actively participate in the government disputing meaning from inside This means that not only creoles are committing to human rights but also other individuals are joining the struggle. Now, aboriginal peoples have voice of their own and not only representation”.

The Indigenous Congress of Pátzcuaro

The Pátzcuaro Congress took place in 1940. It was the first Latin American congress in which the aborigines discussed in equal conditions about their own experiences and needs. Pátzcuaro was the place where a new indigenous policy was born.  It opened an inter-american space for discussion and made it possible to create the Inter-American Indian Institute (Instituto Indigenista Interamericano).

According to Sotelo, this Congress “allowed indigenous people to position themselves as peers, as human beings that have the right to live their cultures, live on their land and enjoy well-being. It also made it possible to present themselves as individuals with their own culture, art and language, considering that until then, everything that was not Christian was subjected to denial and prohibition”.

This Congress marked a before and after in the history of aboriginal rights, because it made it visible and possible to consider  that America was diverse and that it included many cultures and peoples

According to Sotelo, interpreters and translators in judicial processes in cases of gender violence are key to ensure that human rights of Aboriginal peoples are being respected. “Why do I say it is essential? Because in a judicial process either you are the plaintiff or you are the defandant accused of violating rights. And being convicted or judged by a jury that speaks another language prevents you from being able to defend yourself and to understand the charges, ” expressed Sotelo.

Although the presence of aboriginal interpreters and translators in the courts is currently regulated, it is a completely precarious service and it is not very effective. It is necessary to ensure that communication becomes a bridge to the true exercise of democracy and not a barrier.