What is language? - Stillman Translations 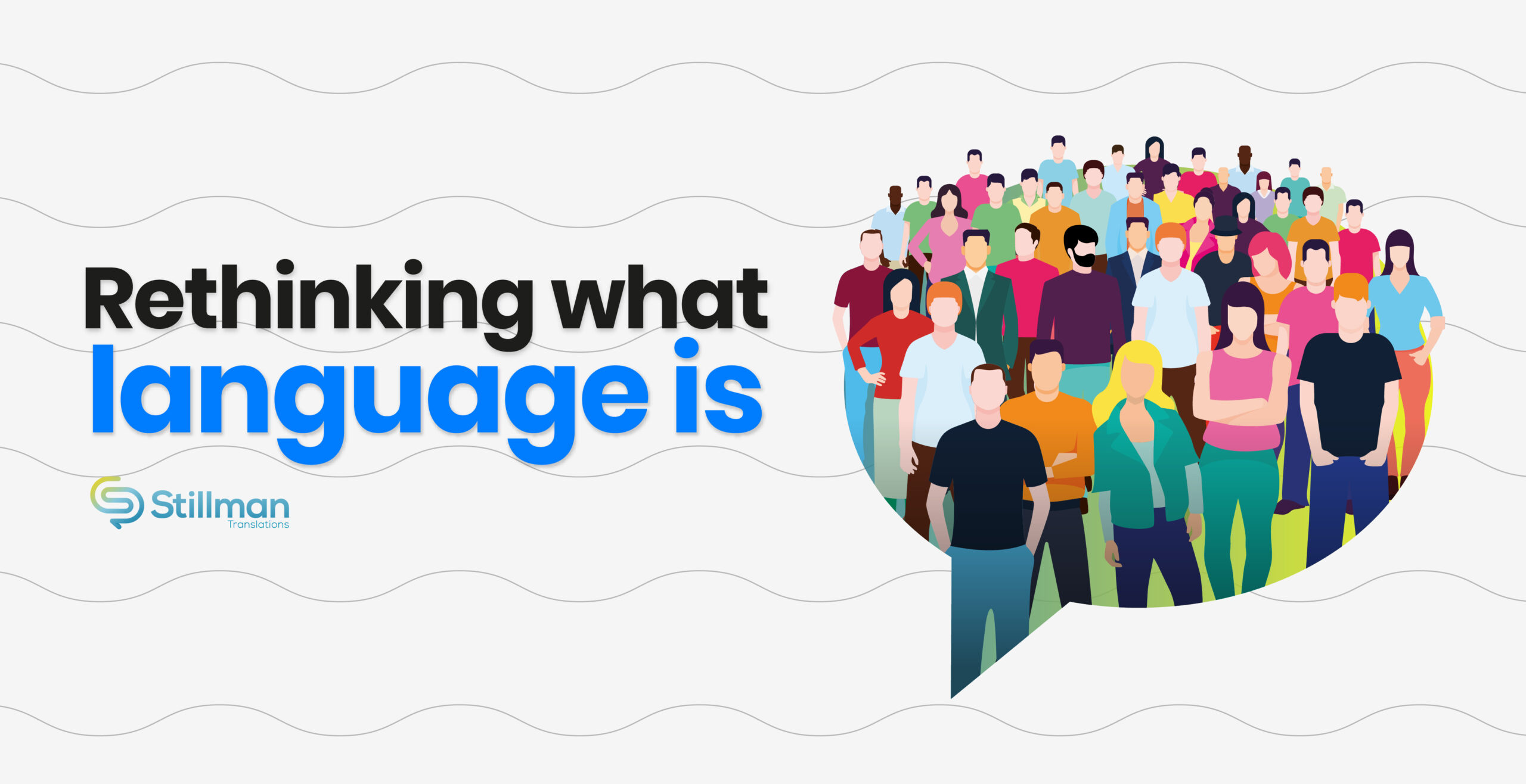 A language is a system of conventional spoken, manual (signed), or written symbols by means of which beings express themselves. The more complex a language is, the more varied its display of functions and characteristics. The typical functions of language include communication, the expression of identity, play, imaginative expression, and emotional release.

A simple definition, with many repercussions.

A language is a system of conventional spoken, manual (signed), or written symbols by means of which beings express themselves. The more complex a language is, the more varied its display of functions and characteristics. The typical functions of language include communication, the expression of identity, play, imaginative expression, and emotional release.

In the case of human beings (though it may be true for non humans), language is also a way to belong and be recognized as members of a social group or culture. And we spread so far and wide, that geography also plays a role in how we configure language.

If we make enough clicks, we could go as far as to say that no two people speak exactly alike. Since one of the functions is self expression, each person adapts language to their personality. From the pick of words to pronunciation all the way to volume and formality or informality.

When are there enough differences for it to be considered a different language? or dialect? Is there then, a clear cut definition of language? Generally, systems of communication are recognized as different if they cannot be understood without specific learning by both parties. If differences impede but don’t prevent mutual comprehension, it may be a dialect. And a dialect may, if isolated too much, one day become a language of its own. So the definition, much like language, is not static.

How we choose to define it, has an impact on us. Our beliefs about what a language is influences us. Here’s why.

Into the rabbit whole

It’s common to hear references such as “kids are like a sponge” they “absorb their surroundings”. If this is so, wouldn’t it make sense for language to be one of those things? The fact that there are words that exist in one language and not in another must have an impact on the imagery one develops.

We use language to transmit values, laws, cultural norms, taboos. It draws and creates boundaries of behavior. Or at least it’s one of the many variables that does so.

The Sapir-Whorf hypothesis , and those who adhere to it, argue for more or less influence of language in thought. It’s a spectrum that goes from linguistic determinism, the idea that without language there is and can be no thought. To linguistic relativity, which states that there are some influences from language on thought. Both ends imply that the words we employ influence how we think.

It’s a tale as old as time. George Orwell in his novel 1984 proposes this very clearly when he introduces the term doublespeak. For those who haven’t read it, it’s a method through which  language deliberately disguises, distorts, or reverses the meaning of words. In his book, the government used doublespeak to change what people thought about subjects. But not only that. They used it to control what people could think. He believed, very much as Benjamin Lee Whorf did, that “language itself shapes a man’s basic ideas.”

Language is, at its core, the medium through which human beings relate to themselves, each other, and the wider world. If we separate language from social interaction, it will leave us with very interesting, but partial understandings of what language is.

It has some common traits, such as:

Language is arbitrary in nature.

This last one is important. For linguist Suzanne Romaine, “any attempt to count distinct languages will be an artifact of classificatory procedures rather than a reflection of communicative practices.”  So, disclaimer, any definition is only useful to its end, but is not an intrinsic truth in itself. Language is a functional category. Much like the heap paradox, we can’t tell in a precise way when it converts from one state to another. But it does and language is important.

Where are we going with all this

“Understanding why and how languages differ tells us about the range of what is human”. Dan Jurafsky, the Jackson Eli Reynolds Professor in Humanities and chair of the Department of Linguistics in the School of Humanities and Sciences at Stanford phrased it this way. And it’s highly interesting. “Discovering what’s universal about languages can help us understand the core of our humanity.”

Stanford linguists and psychologists study how language is interpreted by people. The research they’ve done shows that even the slightest differences in language use can correspond with biased beliefs of the speakers.

One study showed that a relatively harmless sentence, such as “girls are as good as boys at math,” can subtly perpetuate sexist stereotypes. The statement’s grammatical structure implies that being good at math is more common or natural for boys than girls.

In case anyone wondered, this is what linguists do. Linguists analyze how certain speech patterns correspond to particular behaviors, including how language can impact people’s buying decisions or influence their social media use.

Are there more non-fiction examples?

Yes. And they draw our curiosity. In korean, for example, in almost 95% of grammar structures there is no self. No subject. While in English one could say “I am hungry”, in Korean one would instead say “배가 고프다” (bega gopeuda), which literally means “the stomach is hungry”.

The desires of the self seem to come from a neutral or detached source. Same happens with feelings. One could hypothesize that it encourages self-denial and enforces focus on the others more than the self. The community is brought forward.

It is examples like these that bring people to believe that you can’t understand someone deeply unless you speak, think and dream in their language.

At Stillman, we can build that bridge for you. Contact us today.