Why outsourcing language professionals in healthcare are more cost-effective than hiring your team? - Stillman Translations 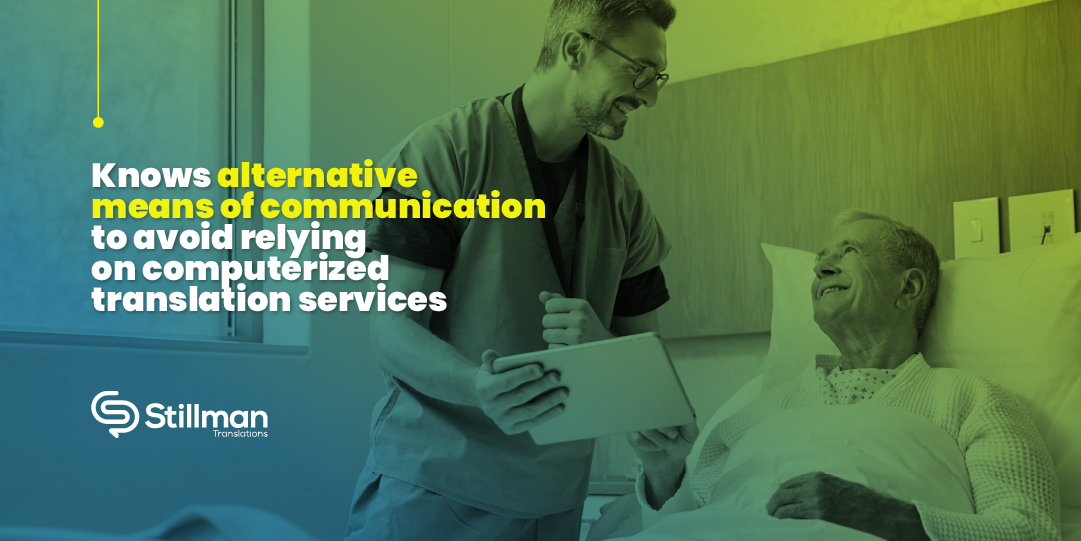 Why outsourcing language professionals in healthcare are more cost-effective than hiring your team?

Hospitals are required to provide language interpretation. How can they face budget limitations to make that happen?

According to the Affordable Care Act, it is prohibited to take official interpretation from children, family, and friends. Unless it’s an emergency. Alternative means of communication should be provided for anyone with limited English proficiency. Despite the lack of reimbursement in most states. And they must do so in a variety of languages. Failure to provide these services when necessary is considered discriminatory and illegal.

To be more specific, the National Standards for Culturally and Linguistically Appropriate Services include four mandates:

The approval of this law had its benefits. It caused a significant reduction in the number of people without health insurance, which fell from 16.0% in 2010 to 8.9% from January to June 2016. And according to a 2014 study by the Agency for Healthcare Research and Quality, it likely prevented +/-50,000 preventable patient deaths from 2010 to 2013.

All this takes place in an environment of growing diversity. Today, more than 50 languages other than English are commonly used in daily encounters between patients and healthcare providers, according to the 2021 Healthcare World Languages Index.

For the President of AMN Healthcare Workforce Technology Solutions, Maureen Huber, there is a clear pattern that cannot be ignored. “From Mandarin to Arabic to Swahili to Hmong, and many others, patients in U.S. healthcare facilities are speaking a broader array of languages than ever before.”

26 states include a sub-Saharan language

But is it so important?

Yes. Flourishing language diversity is undeniable, and health-related emergencies tend to be crucial and time-sensitive. Untrained interpreters are more likely to make mistakes and in between solutions are not feasible.

Why? Children should not be used as interpreters except in emergencies because of their limited understanding of adult issues. It puts both ends in very vulnerable positions. And the lack of a third party leaves the patient in question with a complete lack of autonomy over their treatment. There would be no guarantee of confidentiality, risk of longer hospital stays and readmission, and the unfamiliarity with medical terminology may lead to misunderstandings.

Again, we are providing care, and giving people the opportunity to be understood in a time of need is the least we can do.

What are the options?

All of this doesn’t mean you’ll suddenly need a full staff made up of dozens of language professionals sitting in your waiting room.

There are various means of communication to avoid computerized translation or overcrowding of the hospital. A few of them are:

Each has its pros and cons and is adequate for different situations. For example, telephone services are a common practice and many institutions subscribe monthly or pay per call without a contract.

Many times, institutions manage these by scale. If it’s one of the top languages, face-to-face interpreting could very well be available. If it’s a common yet not as frequent language, the video comes into play. And at phone call level, the volume expands to “all that’s left”.

In all cases, the language professional must be familiarized with the terms coined in the industry. More than one-third of Americans have limited health literacy, and that makes it difficult to navigate the complex U.S. healthcare system. Someone interpreting who does not know the right terms could make out of one typo a huge mess.

These premises lead the way to the question of outsourcing. In the United States, the healthcare outsourcing industry is expected to reach a value of over $66 billion by 2023, up from about $52.9 billion in 2017.

At the same time, according to Black Book Research, by 2022 hospitals will have to reduce costs by an average of 24%. So outsourcing is a great way to free up resources. There’s no need for massive personnel and larger-than-life staff meetings. A full-time specialized position is something to be considered.

Taking into account budget constraints and changing compliance requirements, outsourcing can save money, reduce administrative costs and flexibly adapt to your workspace. It’s scalable and resists better to unforeseen changes.

Principal Director of HBI (Healthcare Business Insights), Tina Williams, explained during an interview “ you always have more languages than staff and it’s not cost-effective to staff 24/7 due to volumes. At my organization, we regularly had patients that spoke six or seven languages. At one point, we had representations for the top five, but, due to budgetary constraints, that has been reduced to the top two languages.”

There is no one-size-fits-all model, but at STILLMAN we can help find the mix and match of language services that works best for you.