How many Latin American Spanish varieties are there? - Stillman Translations 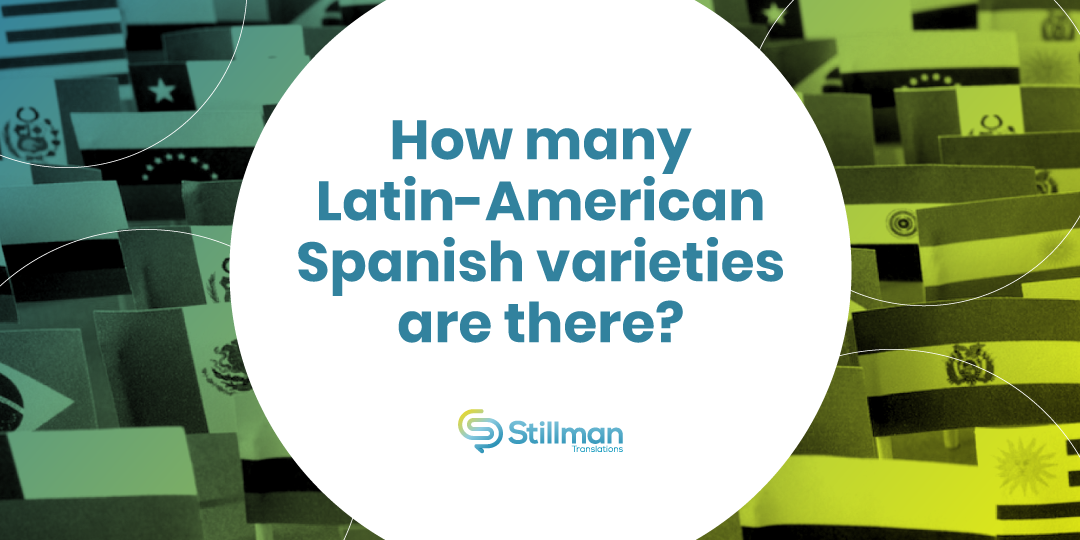 How many Latin American Spanish varieties are there?

Translating a simple phrase into Spanish while traveling somewhere in Latin America, is not always a simple task. While the Spanish language has its roots in Europe, it has been greatly influenced by the native languages spoken in Latin America, making the number of current-day Latin-American Spanish varieties overwhelming! Whether you are thinking of learning Spanish or your business is expanding to Latin customers, here are some useful facts to bear in mind.

How many Spanish dialects are there in Latin America?

While it is commonly believed that there are only two main varieties of Spanish, the truth is quite different. If you have travelled around Latin-America, you have surely witnessed how confusing it can be to try and use some of the most common, everyday words across its borders. Even when all regional varieties of Spanish follow the same written structure, the spoken language has numerous differences in pronunciation and vocabulary, depending on the region.

The list of main Latin American dialects, according to Wikipedia, is: Bolivian, Caribbean, Central American, Andean, Chilean, Colombian, Ecuadorian, Mexican, Northern Mexican, Paraguayan, Puerto Rican and Argentinean (more generally referred to as Rioplatense, which also includes the variety spoken in Uruguay). Do you think this list is long? The list doesn’t even include other Spanish dialects in Spain and Africa!

If you are trying to reach a Hispanic-American audience through your communication channels, chances are you will deal with some form of regional variation. Even if the exact number of dialects is hard to determine, being mindful of their existence is key. This is why a language expert is essential when designing branding and communication campaigns that are aimed at Spanish speakers.

These variations are due, for the most part, to the influence of the many local native languages that were spoken across this vast continent before the Spanish “conquistadores” arrived. For example, in Paraguay and the northern provinces of Argentina, there is still a great influence from Guaraní, the language of the native inhabitants of this region. In fact, Guaraní is still an official language in Paraguay and is taught in schools, along with Spanish.

In southern Mexico, the Mayan language is still alive. Many people who were born and raised in this region are bilingual, having learned their Spanish as a second language,often in school. For example, Bolivia has the largest indigenous population in Latin-America (62%). The list of official languages included in the Bolivian constitution is 36 items long, but there are four main Spanish regional dialects currently spoken, each showing different influences from the native tongues.

As a result of the mixing and transforming caused by history and geography, there are differences in accent, pronunciation, grammar and vocabulary that can make each Spanish variation a new adventure altogether.

What are the main differences between Latin American Spanish dialects?

You may be wondering if the differences are so substantial as to produce misunderstandings. As with everything related to language, there is no simple answer. To put it shortly, speakers of different dialects will mostly understand each other as the core language is the same, and most of the differences are nuance-based. But if your business is trying to open a new market or if you are trying to make new friends, there are many aspects in which misunderstanding can be … well, noteworthy.

The area where things are really confusing is vocabulary; or, more precisely, slang.  All across Latin America, and largely due to the influence of the native, local languages, vocabulary has developed in different directions. This means that the same word can often mean very different things in different regions.

Take for example the word “fresa”, which means “strawberry” according to its etymology and definition. Mexicans use this word to describe a cultural stereotype of people who come “from an educated, upper-class family”. If you were to refer to this stereotype in Argentina or Uruguay, the word you would need is “cheto/a”, which means “pretty woman” if you are in Honduras. For a hilarious description of slang differences in Latin American regions, be sure to watch this clever song-summary by Colombian brothers Nicolás and Juan Ospina, from the duet Inténtalo Carito. Enjoy!

As you can see, the terrain is muddy when it comes to spoken and informal language use, but then again, this is where the fun process of language development usually happens! With 400 million Spanish speakers around the world, variety and change are the most natural of consequences. To navigate this confusing territory, we need to equip ourselves with patience, a sense of humor and a trusted language specialist!