Legal translation: what is it, why is it important and some characteristics - 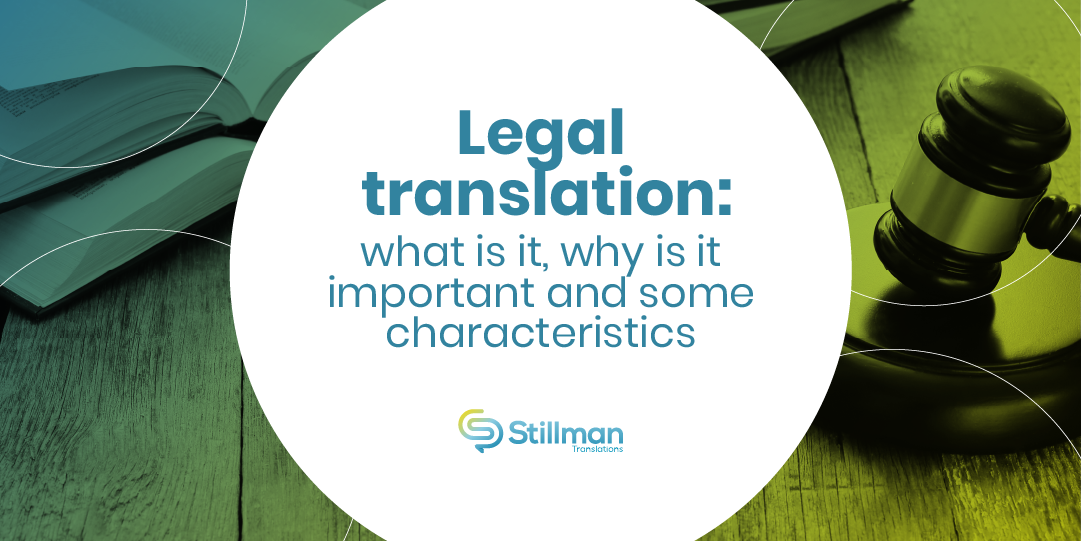 Legal translation: what is it, why is it important and some characteristics

As with any sort of translation, legal translation consists of transforming documents from one source language into a different target language. But there are some peculiarities about this type of translation. Legal translation stands at the crossroads of three areas of inquiry—legal theory, language theory and translation theory—that are fundamentally indeterminate, largely because of their reliance on natural language (Joseph 1995: 14).

The law itself is quite an unstable discipline. It relies on some abstract and changing notions, that are extremely different depending on the country or region where those laws are applied. Legal discourse is in a state of constant flux: its meaning shifts depending on the language in which it is expressed and even depending on the reader (Harvey, M. 2002).

Laws are interdisciplinary, as they regulate most areas of human activity. Legal translators must have a profound knowledge of concepts and terminology not just related to law, but also related to the area to which it is being applied.

What is legal translation?

Legal translation is the field of translation that transforms legal documents and material from one language to another, respecting the original meaning. This sort of translation consists of a procedure that takes into account legal background. Among the different documents that can be translated related to law, are the following:

‘Legalese’ is almost like a language of its own. It requires a legally trained person to understand it. The same thing happens with legal translators.They have to know the laws of the country, because a word-for-word translation may not accurately represent the meaning of the original. It is important that legal translators understand the legal implications of what is being translated.

The importance of legal translation

When someone hires a translator or translation agency for a legal translation procedure, it is extremely important to be able to depend on a reliable outcome. If the translation isn’t accurate enough it can have legal consequences.  An improperly translated document can directly affect people’s rights.

It is fundamental that law firms can be sure that the result is accurate and true to the original. The translation team must be familiar with the business and legal practices of the country.Otherwise, inaccurate information can generate a big misunderstanding. For this reason, it is always recommended to work with translators that translate in their native language.

Legal translation also becomes useful when materials that have been previously translated require updating. It is common to send the clients two versions of the document, one with track changes and another clean version. This way, the clients see exactly what has been changed and can compare it with the original translation.

Countries have different ways of formatting their legal documents.  When translating a document, the same formatting as the original is used. But if there are differences between the countries or language, the formatting also has to be adapted.

According to the research of Malcolm Harvey (2002), there are four characteristics of legal translation.

1.The nature of legal discourse

Legal documents can be divided into prescriptive and descriptive texts, as well as hybrid texts which contain both functions. The target text has legal effects. The function of a document depends not on its inherent nature, but on the communicative situation.

The law is an amalgam of different systems which have evolved separately and are generally confined within national and linguistic boundaries (Groffier 1990: 314). Legal translators must find equivalents for culture-bound terms, particularly those related to concepts, procedures, institutions and personnel. However, European and international law is having a huge increase, which, for some, leads to thinking that the law will gradually become more standardized.

Specialists in legal translation understand fidelity as, “…achieving an equivalent impact on the target reader, which may justify substantial changes to the original text to respect the stylistic conventions of the target legal culture.” (Sparer 1979: 78-90, Covacs 1982: 95) In this way, the translator is not just a bilingual typist, but a text producer. According to Sarcevic, the fidelity must not be to the source text, but to uniform intent of the single instrument. For example, what the legislator or negotiators intended to say.

The language of law, as politics, ethics and metaphysics exists within the realm of rhetoric, relies on natural language. This causes a lot of ambiguity, which can cause troubles when it comes to interpreting legal content.

What skills does a legal translator need?

According to the translator and revisor Robert Breuer, creating a good translation is a very meticulous craft. The translation has to reflect the message of the original accurately and idiomatically. The same tone and level of language has to be sustained. A legal translation should be free of grammatical errors.

When it comes to international treaties, ambiguity can represent a diplomatic tactic. In literary translation, ambiguity is not necessarily viewed as a defect. In order to produce a quality legal translation, translators must avoid “interpreting” ambiguities.

The skills a legal translator should possess, according to Breuer, are:

What Skills Does A Legal Translator Need?