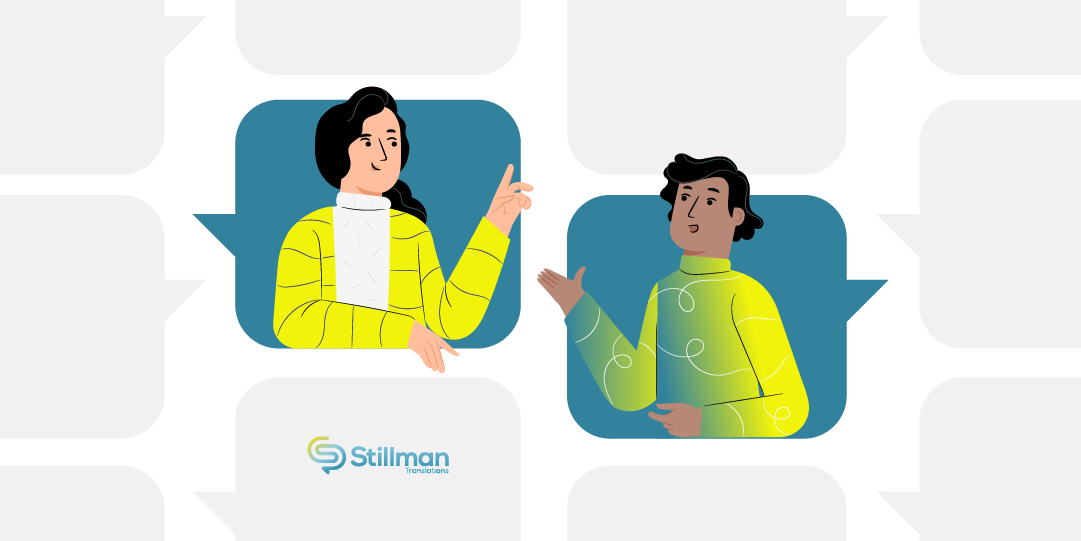 What’s behind small talk and how to dominate it

There are two big entry barriers when attempting to talk to a stranger: language and how to start the conversation.

“Nice weather, right?” “It’s cold outside” “I’m so glad summer’s here” “Things are hectic this month, don’t you think?” “Did you hear what happened last Friday?”

Small talk seems superficial and easy. Something most people avoid and sometimes accuse of being fake. But this momentary exchange with someone you don’t know can help figure out which deeper conversational topics might be of mutual interest. There’s more to it than it seems.

So when approaching a stranger or potential client, two things could come to mind:

1. Do we speak the same language?

2. How do I start a conversation?

The first one is an easy solver. We have language professionals from all over the world. Over the phone or in person. We won’t let this come between a good opportunity. Now, for the second, we need to do a little recap on the science of small talk. How do we pick the topic? How can we avoid awkward small talk questions? What’s the difference between phatic questions and small talk? And how does it vary around the world?

WHY SMALL TALK IS PRETTY BIG

The name “small” in “small talk” is misleading. It’s appropriate since it’s usually applied in brief periods or in-between moments with people. But it has an important social function. In most situations, we can’t skip forward from strangers to friends with deep meaningful conversations. Small talk eases the way into relationships with our surroundings. Local people, clients, distant family.

David Roberts, from Vox, describes this interaction as something that “weaves and reweaves the social fabric, enacting and reinforcing social roles and the activity”. Also, research shows that frequent small talk, even among those who identify as introverts, makes people happier. So why does it have such bad press?

Nicholas Epley, a psychologist at the University of Chicago, began noticing an “antisocial paradox”. “Every morning they’d get on the train, the most social animals on the planet, and they’d ignore each other,” he described. “That’s the kind of observation that, at least for a psychologist, gets you pretty excited. Why on Earth do people do that?”.

He carried out several experiments. The method was always the same: he’d approach general commuters before hopping on the train toward Chicago. And he’d give these commuters different tasks.

One of them was to imagine having a conversation with a stranger and rate the conversation. Against all odds, people were drawn to imagining pleasant conversations. But when asked about how they would potentially start that conversation, they rated the difficulty of breaking the ice at a four on a scale of zero to six. But more importantly, they guessed that fewer than half of their targets would want to talk back. If people seemed so willing to talk, why were they so sure about being rebuffed?

Epley denominated this pluralistic ignorance: Everyone is willing to talk but thinks everyone else is unwilling.

It’s important to clarify: phatic expressions and small talk are not the same. Even though both are ritualistic, phatic leaves no margin for creativity. Things like, “Hey” “No problem,” “See you soon” “How’s it going? Good. How are you”. They’re not meant to deviate from those rehearsed interactions. This is why it can be so shocking to drop a “How’s it going?” to a coworker and receive a full-on discharge of a terrible day when you were aiming for an “all good, and you?”.

But when you say, “How are things these days,” and someone responds, “Oh, well, you know, not too much. I’ve been doing this,” that’s when small talk begins. Still, the communication of ideas or information is secondary. The purpose is social bonding. As a Vox article develops, “It asks and answers familiar questions, dwells on topics of reliable comity, and stresses fellow feeling rather than sources of disagreement”. This explains the ubiquity of sports in small talk: there is a simulation of conflict with no serious consequences, and large amounts of specific information. A perfect small talk candidate.

This is the inevitable next step of this trail of thought. When you share a certain time, space, social context, common technology, and social media and entertainment platforms, things happen. As in, social and cultural cohesion happens. Linguist Lawren Gawn exemplifies this clearly: “I know all the references from Mean Girls because enough people have seen it. I know all the references from Oregon Trail, that very early video game that people played, even though I never played it. (…) Some phrases get repeated. So, even though I haven’t played that game, I can make these references to a certain level of depth”.

The Simpsons, The Office, Worlds of Warcraft, Shakespeare, comics in general, popular folk songs. They all intertwine in the social fabric of small talk. We seek to find common ground and accomplices in our tastes and preferences. Shared memories. We identify people as part of our group, at least some made up fuzzy round the edges group, where if we have this in common, there is probably plenty more.

Memes, movie references, book references, video games, WhatsApp stickers. One is no better than the other, they all carry out the same social bonding function for different age groups, social groups, and so on.

SMALL TALK AROUND THE WORLD

Lawren’s podcast, Lingthusiasm, together with Gretchen McCulloch, mentions “the flip side of having a small group of people with whom you’ve built small talk on recurring references”. And it’s that you get used to it. So much, that when that structure breaks, you find yourself in those very awkward encounters where you’re planning the escape as you speak. It’s not that the other person is hard to reach out to, but there are different cultural expectations of how small talk should function on the other end.

What’s more, it’s not only that these codes and references break, but “go-to” questions may be different. We tend to have a certain mental checklist of appropriate questions (you can find a few here) we feel comfortable with. These don’t always match. Sometimes for personal reasons (I may not be comfortable talking about my job because it’s unstable or complicated at the moment) and sometimes for larger cultural reasons.

Each person has an awareness about what they deem appropriate topics for conversation. But most countries, or regions, also share these at a macro level. For example, in Nepal, there is a “suffering story genre” expectation in small talk. When engaging in conversation with a stranger it’s common (and well seen) to show people how resilient you are. This is done by sharing all the bad things that have happened in your life.

In other cultural scripts, as we quickly went over with phatic expressions, this could no doubt be interpreted as uncomfortable oversharing. But if you think about it, the western hemisphere has its genres. Like the vacation genre, where talking about travel stories, and airport mishaps is a merry way to go. Or sharing common hate for tedious bureaucracy. “There’s so much paperwork I don’t know what to do. So unnecessary!” “Tell me about it”.

There will be more cultural clashes where these came from, so it’s good to study beforehand. Like, in the US, it’s an ok topic to maybe ask people how much money they make at work. When in Argentina that could baffle the person at first. And in Russia, they tend to discuss an in-depth hot topic rather than the score of the game or the upcoming weather. While their neighbors in China enjoy exchanging pleasantries. First business meetings among Chinese associates are rarely productive but are meant to see how comfortable you feel with the other person first.

So, how can we avoid being stuck in uncomfortable silent filled small talks? Be it for these larger cultural codes or personal reasons. The answer lies in Grice’s maxims. Grice had four maxims, one of them, was relevance. It hints at an unspoken truth in a conversation where we will attribute any response that follows a question, as an answer to that question, at least in spirit. This is why maybe a random fact or anecdote can be interpreted as a valid answer to “how are you”. It means it’s what comes to mind when you ask me this question, and therefore will probably be related.

We here realize that it’s the intention behind the question that matters, and not the question itself. Which takes us out of this pickle jar. We’re not meant to answer exactly what was asked. We’re meant to read what the other person is trying to ask.

With this in mind we can:

This way, you can narrow the options and take the conversation to a pleasant interaction. Maybe even find this deeper domain-specific common interest.

Have we changed your mind on small talk? Even a tiny bit?

We have now stated that it doesn’t only fill in the blanks, but connects people. There’s an analogy where small talk is compared to bricks that serve as a foundation for trust. One or two bricks don’t make much. But when you start piling them up, you have something you can work with. During these small conversations, you start molding relationships. And slowly, these conversations will work as a contrast between a colleague, an acquaintance, a friend, or a relationship that’s deeper and more meaningful.

Don’t be afraid to open up a conversation. Practice your small talk skills, we’ll be here to make sure you reach through if you need any interpreting, subtitling, real-time translating, or proofreading. Contact us.