An economy that includes all – real possibility or utopia? - Stillman Translations 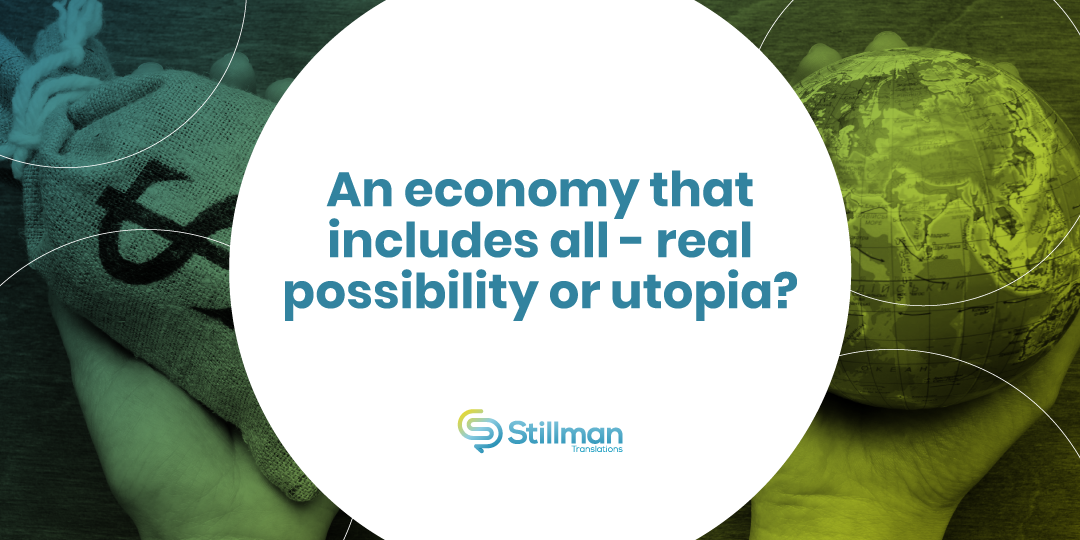 An economy that includes all – real possibility or utopia?

An economy that is social and solidary. Is that a realistic possibility? Well, to about 12% of the world it is the reality. In case you are not familiar with the concept, a “social economy” or “solidarity economy” refers to a different way of doing business, which is driven by values rather thanf revenue. A global shift to this kind of economy would be world-changing. But is this notion a real possibility or just a utopic dream?

The meaning of social economy

The term “social economy” derives from the French économie sociale, originally referred to as “social and solidary economy” since about 1900. Despite being around for over a century, the concept still lacks recognition and clarity; thus, depending on where in the world you are, it may refer to different types of organizations. In a broad sense, it includes foundations, cooperatives and non-profits; but I can also include peer lending and ethical purchasing associations, trade unions and open software projects.

The common denominator for associations in this sector is that they are private groups, functioning under the following principles:

Today, there are 3 million cooperatives in the world, which represent 12% of the world population, and 300 of those generate 2.1 trillion US dollars in revenue each year. Cooperatives also employ 280 million people worldwide (about 10% of the world’s population).

What does “people over profit” mean?

Let’s say you are passionate about climate change or ensuring medical care is available to the elderly in your community. These are concrete problems that require concrete solutions, right? Why should you only devote your “free” time to volunteer at an organization that is aligned to your purpose? Cooperatives and other groups in the social economy are looking to find solutions to common problems affecting societies as a whole. By investing your energy and talent in one of them, you may be part of a business model that is working for you, and not the other way around.

Another example of this would be in the case of artists who have a great idea for a product and want to ‘make it’ in an extremely globalized market, where they need to compete with products from giant importers, with much lower prices. Creating a cooperative, for instance, would make it possible for them to unite forces and collaborate. Each member could contribute in whatever way they can: labor, expertise, equipment, clients, etc. And just like that, a small business is now able to produce a competitive product.

Most of these organizations are run according to the “one person, one vote” rule, which means everyone can take part in decisions and the profit is distributed equally. This creates an environment where ideas and values take priority, not capital. Hence, people – their needs and their goals –  are more important than maximizing profits. If you are interested in realizing your full potential through a project that also does some good in the world, this may be the answer.

Social economies do face their own set of challenges. The main obstacle these organizations face is having a formal recognition within the system: registrations, regulations and policy, etc. Several international and regional alliances and associations have a key advocacy purpose, pushing for the development of policy that allows members of the social economy to have proper recognition of their role in society.

In Latin America, there are good examples of the social economy representatives thriving and successfully supporting the local economies in overcoming major crashes. In Argentina, solidarity-based organizations have been fundamental in rebuilding a sense of community and peace in certain sectors of society, especially after the military dictatorship of the 70’s and the collapse of the economy in 2001. The word is spreading and more people turn to this model looking for a way to overcome hardship, but there is still a lot of work to be done.

In the US, the movement is better known as “solidarity economy” or a network. Their representative body has the mission, as stated in their official website, to fight for “equity in all dimensions,” race and gender being some of the highlighted aspects. There is also an organized directory available, for those looking to join the network. Unfortunately, despite the impact this type of work can have, involvement is still low and governments are shy to support a social and solidarity economy model.

No matter where in the world you are, a growing number of people are working to make a positive change in our economies. Their daily practices effectively place people and the planet front and center, by supporting the values of mutual aid, equity, sustainability, and care for all. A utopia? Perhaps! However, one can’t help but wonder if it may be a utopia worth pursuing. After all, an economy that includes all would be quite an achievement.