Telugu: 10 things you didn’t know about this language 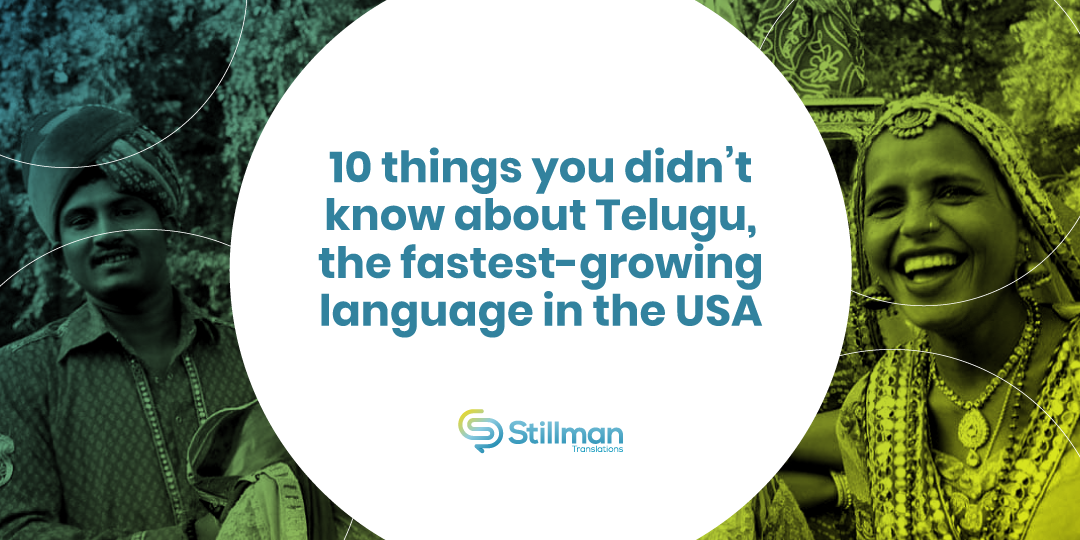 10 things you didn’t know about Telugu, the fastest-growing language in the US

You may not have heard of it, but Telugu is one of the oldest languages on earth. It is unique in its roots and it was the center of political activism that led to the creation of linguistic states in India. It is also the fastest-growing language in the US and part of a new trend in translation services. Here are 10 things you didn’t know about Telugu, the fastest-growing language in the US!

Telugu is the largest member of the Dravidian language family. Primarily spoken in south-eastern India, it is the official language of the states of Andhra Pradesh and Telangana, located north of today’s Chennai city (formerly Madras).

There are currently 75 million speakers of this language, living in India and around the world. After Hindi and Bengali, it is the third most frequently spoken of all the Indian languages.

3.     Telugu is one the oldest languages in the world

The Dravidian languages are considered some of the oldest ever spoken. Specifically, Tamil –one of Telugu’s “cousin” languages –  is recognized as having been around approximately 5,000 years ago. There are records of Telugu having been used for literature and poetry since the 11th century, but the first written materials in this language are dated back to 575 CE.

Because it is a phonetic language, its spelling coincides with the sounds that are pronounced when speaking Telugu. This means that approximately every letter in writing is a sound in speech, which makes learning Telugu relatively easier than learning English. Also, its grammar is simple and it is a free word-order language, which makes it easier for the learner to form new sentences, as they do not need to follow a rigid sentence structure.

Despite the commonly held assumption that Telugu comes from Sanskrit, recent research has proven that, in fact, Telugu belongs to the Dravidian language family. This family has its own unique roots and history, unrelated to any other known language family. Sanskrit is a more recent language, and even though it has left its mark on Telugu’s lexicon, they are not descendants from the same language tree.

6.     Telugu has changed the Indian map

In the tension created by British domination, cultural leaders of the Telugu-speaking regions played decisive roles. A major part of the local identity was a feeling of pride in their language, which led them to demand a separate state. When the central government refused, a local leader called Potti Sreeramulu fasted to death in 1952. But eventually, the people’s request was heard by the government and, in 1953, the Andhra state was created. This was the kick-start of a major political transformation process by which linguistic states were formed throughout India, in the years that followed.

7. The fastest-growing language in the US

8.     Telugu is at the core of the American IT sector’s growth

As with most linguistic phenomena, there is a social reason for the growth of Telugu in the US. The immigration of many engineers and technology developers from the Telugu-speaking states of Andhra Pradesh and Telangana started with the need for qualified professionals in the information technology sector. Many IT-savvy Indians from the city of Hyderabad migrated to the US in the 2000’s along with their families, creating a Telugu-speaking community that continues to expand. This has, in turn, also increased the demand for Telugu-based services, such as language lessons, books and technology.

9.     Telugu is part of a new trend in translation and localization services

Technology giants such as Netflix and Amazon are turning their localization efforts towards Indian languages, in an attempt to grow their customer numbers. It was only last month that Amazon announced their websites and apps would also be available in Telugu, Tamil and other members of the Dravidian family. These languages combined have a reach of approximately 200 million speakers.

10.    Telugu has a feminist tradition

In a traditionally patriarchal culture, there is a surprising Telugu art-form that is considered feminist. It is the oral tradition of the Ramayana songs. The Ramayana is an ancient epic text from India with many forms of transmission, both written and oral. It narrates the life of King Rama, with an emphasis on his deeds and accomplishments. But the Brahmin women of the Telugu-speaking regions do not conform to the typical story. Instead, they “translate” the epic into a tale of Sita’s life (Rama’s wife). The Ramayana takes on a truly feminist format, where Sita  is the protagonist, instead of her husband.

Velcheru Narayana, R.; A Ramayana of their Own: Women’s Oral Tradition in Telugu, University of Wisconsin. Retrieved from: Google Scholar.