What is the best English accent in the world? - Stillman Translations 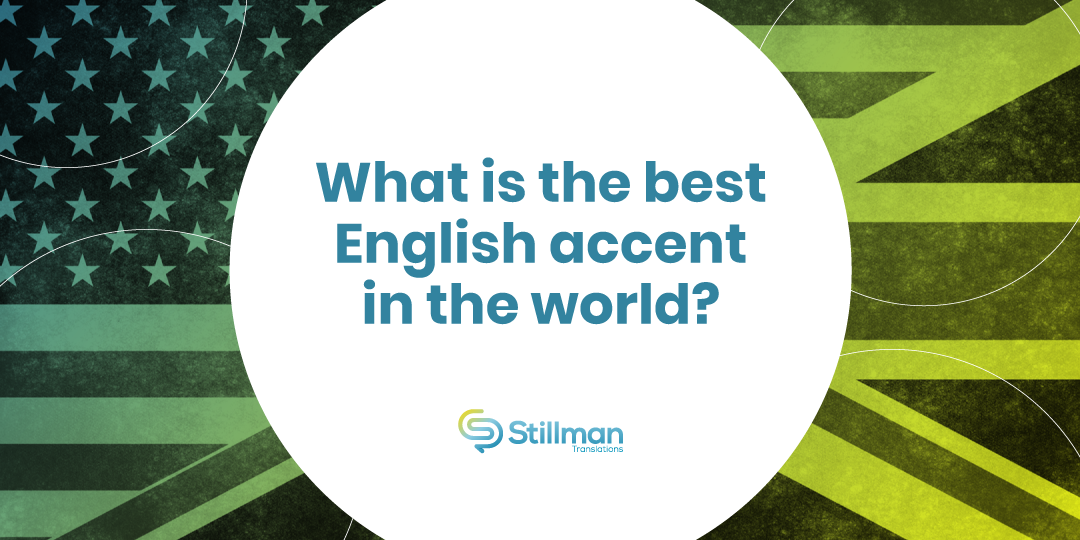 What is the best English accent in the world?

There are countless English accents in the world. And this fact alone is a sign that English is a living language, used by millions of people around the world. Linguists and phoneticians work hard to keep track of the differences and explain them. But what is the best English accent?

What is an accent?

An accent is a pronunciation a way in which people pronounce language. It is the result of how, where and when we’ve learned a particular language. We are all aware of the fact that an accent tends to vary from one region to another, but did you know there are accents which have “died out” or were artificially created for a specific purpose?

The exact number of English accents in the world is very difficult to determine. It is interesting that we cannot predict accents based on geography either. Imagine the British Isles, where we can find a myriad of accents in a reduced territory, and compare it to Australia, where the entire country speaks a rather similar version of the language. Clearly, distance is not the key.

Accents, like dialects, are caused by the natural process of evolution that all living languages experience. One more reason to celebrate the differences and learn about them!

Perhaps the two most iconic English varieties in the world are British and American accents. Both of them have a form of “general” accent which is perceived as more educated or correct than the other varieties, as if having an accent-free speech was a sign of social status. But in truth, they are not versions of the language’s development and growth.

Some people believe that RP (Received Pronunciation) is the most standard or general accent in British English. Many EFL (English as a Foreign Language) schools teach it because it is supposed to be the most “polished” pronunciation. It is typically referred to as “Queen’s English” or “BBC English”. The main reason it is so famous is that it is regionally neutral, but in fact only 3% of British (or rather, English) population speak it. And no, the Queen does not speak it either!

It’s American equivalent is General American. This is the accent that is most taught in USA EFL. But some linguists claim that, unlike RP, it does not exist, because it was created in 1930 by a linguist called John Kenyon, following his own regional pronunciation as the standard. But as it turns out, this accent (Midwestern) later shifted, rendering his concept void of meaning. However, the notion persists; mainly because of the illusion that accent-free English would be “better”.

The differences between British and American accents

There are hundreds of accents within the British accent, and a similar amount of American English accents. But speakers of each of those varieties can immediately identify speakers of the other, as being from either the USA or the UK. So, we can accept there is a series of differences that sets them apart.

As phoneticians describe it, there are two main differences between the way Americans and British speak: the “r” sound and the “t” sound in the middle of words. The marked “r” sound in American English is called “rhotic” and you can identify it in words like “car” or “park”. If you think of how a British person (except for the Irish) would pronounce these words, they would sound more like “cah” or “pahk”.

The “t” sound in words like “water” is also pronounced differently in each accent. Where Americans would make more of a “d” sound, people in the UK have a variety of approaches ranging from a marked, aspirated (releasing lots of air) T sound to a silent break in between the vowels. This can lead so some interesting misunderstandings! For instance, the words “pearl”, when pronounced by a Scottish person, sounds a lot more like the word “petal” in an American accent.

What is the best English accent in the world?

A study has found that, as a general tendency, speakers hold the belief that the accent they are most familiar with is the most correct. Other studies show that we have associated accents with our preconceived ideas and perceptions of the people who speak them. This means we subconsciously associate the way some groups speak with the way we feel about those groups.

As described by said study, “a New York City accent sounds aggressive and impatient; a Southern Californian accent is slow and ditzy; a Southern accent is dumb and uneducated. These associations have, of course, no basis in reality.”

So how can we identify, with a basis in reality, the best English accent? The answer to that question: it is impossible because accents are the result of idiosyncrasies and history, which just like culture, have no objective criteria. There are English accents in all of the continents. And the fact that people sound a certain way does not mean they speak a lesser version of the language.