What’s the best video format for ads? And how can it reach more people? - Stillman Translations 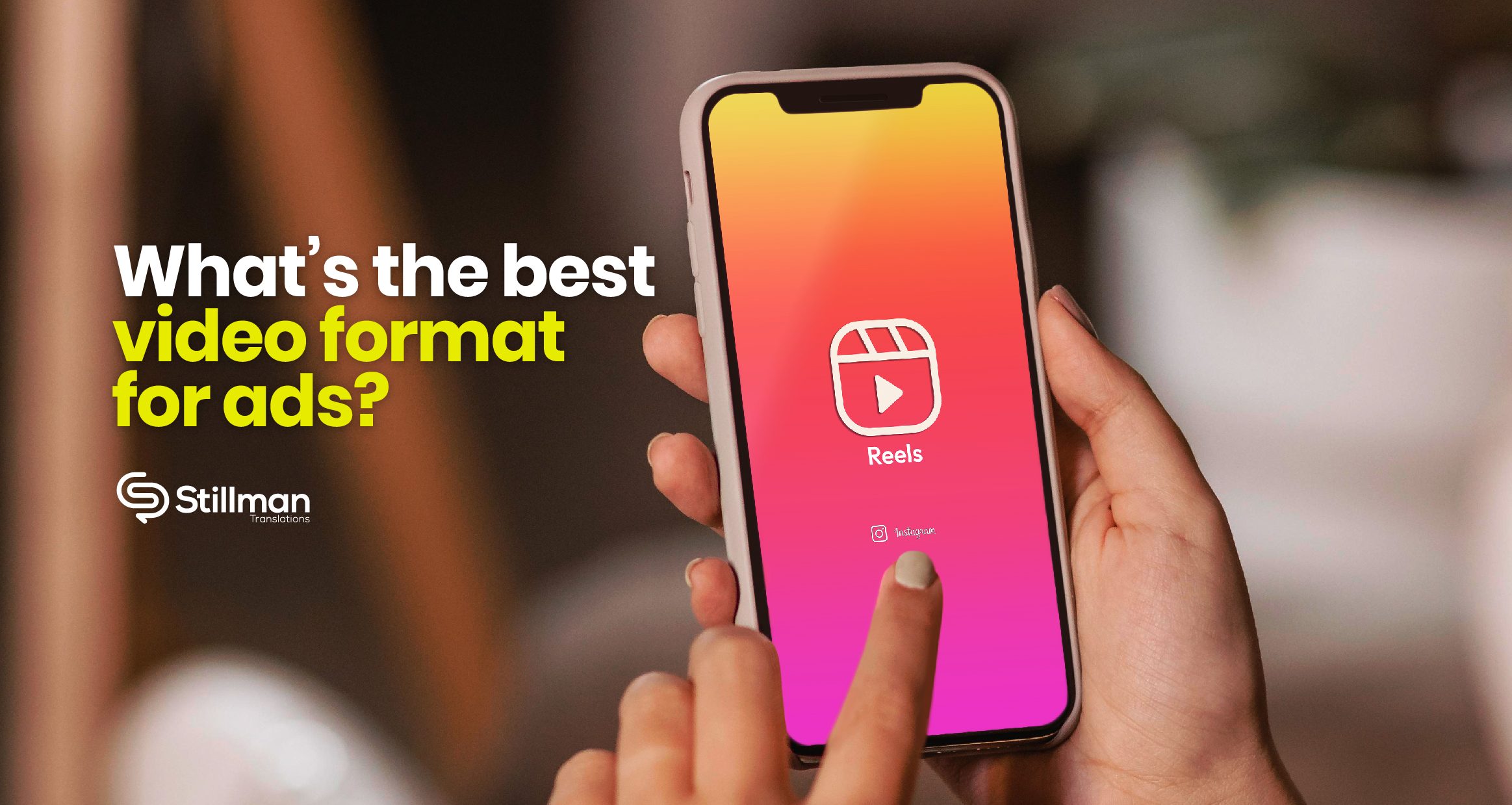 What’s the best video format for ads? And how can it reach more people?

In video claims it’s 88% of marketers that report that their videos result in a positive ROI. How can we reach more people? What format works best where?

How are you working on your multimedia campaigns? Do you know which format performs better and where?

At first having a salesperson knock on every door was an infallible sales method. A strategy you couldn’t do without. At some point, the same happened with newspaper ads and ads on the streets. And so advertising evolved through time and each decade to more efficient, widespread formats and channels.

Today, an audiovisual strategy seems pretty basic. According to Forbes, nearly 90% of marketers are using video in their campaigns, it can spike viewability all the way up to 70%. In video claims it’s 88% of marketers that report that their videos result in a positive ROI. It makes sense, video file formats act as containers for audio, video, subtitle, and other metadata storage. Which is pretty varied and accessible. We all need and implement multimedia campaigns. But do they vary from country to country? How can we reach more people? What format works best where?

Localization, translation, subtitling and dubbing are part of the answer.

We’d love to say there’s a magic formula you can follow. Some instinctive step by step that solves every problem. The opportunities for creativity are ample and rich, which is great, but distracting. Many dally around where to start. A tricky situation, because the best ad format for your video ad campaign will depend upon many things, and there is no right answer. There are so many places to start.

There are a few questions that help us orient our decision:

We won’t go through them all. But we want to give an overview to get creative juices flowing.

These are the most common digital video formats and their most frequent uses.

MP4 is the most common type of video file format. It can play on most other devices as well. MP4 stores video and audio files and text, but the high fidelity is lower than others. It works perfectly on YouTube, Facebook, Twitter, and Instagram.

Also known as QuickTime Movie, it stores high-quality video, audio, and effects. In consequence the file is, of course, larger and heavier.  But not heavy enough that Facebook or YouTube don’t support it.

AVI (Audio Video Interleave) works with nearly every web browser on Windows, Mac, and Linux machines. It offers the highest quality but also large file sizes. It is supported by YouTube and works well for TV viewing.

Flash video formats FLV, F4V, and SWF (Shockwave Flash) are designed for Flash Player, but they’re commonly used to stream video on YouTube. Flash is not supported by iOS devices.

These formats are best for videos embedded on your personal or business website. They are small files, so they load quickly and stream easily.

Not all videos are simply a set play and watch how we do kind of advertising. There are different ways to surprise, appear and interact with your audience.

These video ads are interactive online. The catch is that they have a reward at the end of the video if you participate correctly. They have great completion rates because they are highly interactive. But they may result in low-quality traffic if the ones watching the video ads are not specifically interested in the ad, but only stay because of the fun interaction.

Interstitial ads are often full-screen ads and appear when the user scrolls to the next level or section of a game or app. They tend to have a higher click-through rate compared to other ad formats.

They are very popular in the gaming industry. Candy crush kind of games and the like. The playable ads are interactive videos that are shown inside apps and offer demo versions of other games to get you to install the game if you enjoyed the demo. Though many people have “pretend” playable ads, which are just videos showing a demo, but still offering a glimpse about what the fun is about.

A reveal video ad is an in-content video ad that takes a specific action once the user scrolls down the page. They have simple implementations and better viewability.

An ad overlay provides advertisers with the opportunity to place traditional banner advertising inside streamed video. It’s typically a semi-transparent banner placed at the foot of a video screen. The overlay remains static, the video runs underneath it and people can click your ad at any point during the video or dismiss it by clicking on a close button.

Each video makes more sense according to what you sell, what your key message is and where your people will watch it. Will it be at a time where they have focus to spare? Or during the commute to work? Do you need them to buy then and there? Is it a simple task to achieve?

The whole UX of the business needs to be analyzed. But asides from that, to make it all the more effective, even global, there are measures that can be taken.

Videos should make sense without audio. It’s important that it’s there, because it completes the experience and is more accessible for those who have any type of sight impairment. But  captions and subtitles are extremely useful.

Once you subtitle you can both a) develop more complex content and b) expand to other countries, since subtitles are easier to adapt than audio.

We of course, nevertheless, recommend working only with translators who are based in their native territory in order to be up-to-date with idioms, slang, and context. Automated subs are not consistent enough in quality. And people have the skill to interpret the core message and adapt to the target audience. So, at least today, we still recommend working with a qualified translator.

Dubbing is useful if there is a person talking, if the tone in which the message is being told is important, and if we want to keep the feeling that what we’re watching is real life and originally made in the target language. Mostly because dubbing is synced with the lips and person talking. Therefore more costly and time consuming.

If there is no need to sync with the person, voiceover is easier since reading a well translated script in an allotted time is enough.

Multimedia localization can apply to different multimedia projects, such as:

And more. That’s a lot to take in, but don’t worry, if you need to work on your audiovisual strategy across countries, languages and cultures, you can always count on Stillman.

If you would like to learn more about this topic go to
“It’s cold outside, but your communication should be warm”