10 Translators that made history - Stillman Translations 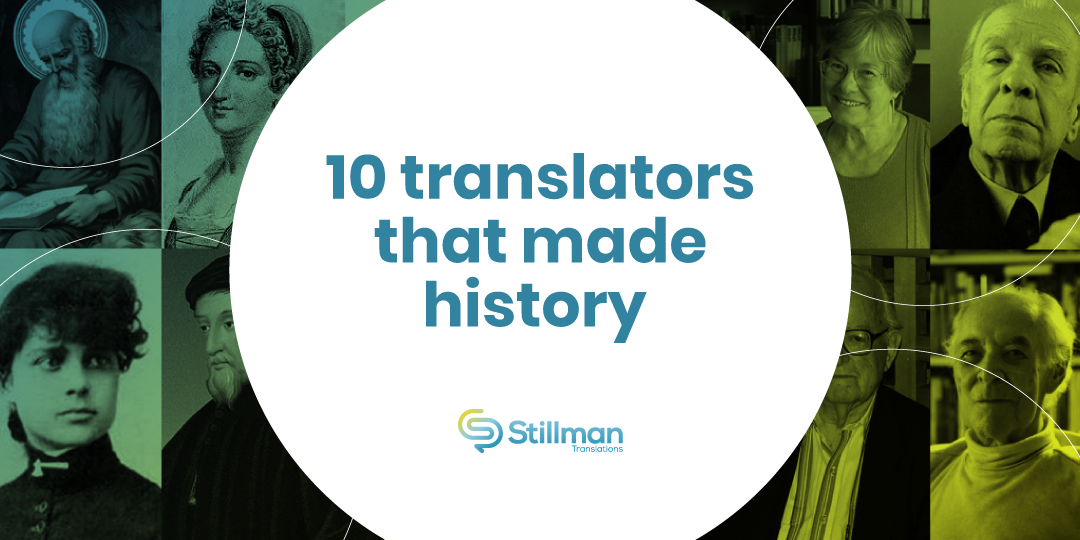 10 Translators that made history

Being a translator is not an easy job, but sometimes their work is not recognized as it should be. What translators do is very important to our society as it helps spreading scientific theories and knowledge all over the globe, making them accessible for almost everyone. Unfortunately, this job has been under the radar for many years because it is believed that in the industry the translation must not get noticed, it should be objective and invisible. Translators work didn’t even get the credit it deserved until recently, when editorials started adding their name on book covers, acknowledging their importance in the publishing process. We chose some translators that were and are still very important in our history.

Experts consider his work as one of the first translations ever done. He translated a big part of the Bible from Greek and Hebrew into Latin. His version was the only one used by Catholics for many years and it became the official translation of this all-time best seller. Religion wouldn’t be what it is today without his work.

Tolstoy, Dostoyevsky, and Chekhov wrote some exceptional literature pieces that became classics but was Garnett who made that possible because she translated their work from Russian into English, making those authors known all over the world.

One interesting fact about her translations is that she used to leave out words and even sentences that she didn’t fully understand and that’s why many experts say that her works are incomplete.

She translated 71 pieces of Russian literature and retired in 1934 when she was 73 years old.

Her most impressive work was her translation of Reneé Descartes’ Principles of Philosophy. She translated that classic piece of philosophy history from French into Italian in 1722. Barbapiccola said that her motivation was to make philosophy and science more accessible for women. She is considered a milestone in women’s education as she made information more accessible for them.

He was a very well-known Argentinian writer, but people tend to forget his work as a translator. When he was just 9 years old, he translated The Happy Prince by Oscar Wilde into Spanish for a newspaper. He translated works by Virginia Woolf, Franz Kafka, Edgar Allan Poe, Hermann Hesse and other artists. He even wrote about translation and its difficulties. Critics often say that his translations were not too accurate and, in some cases, even creative.

Borges’ version of The Happy Prince by Oscar Wilde

He translated many Latin American writers’ works into English and brought some classics to English speakers in many countries. His most known and impressive work involves translations from Gabriel Garcia Marquez, Julio Cortazar and Jorge Amado’s texts. It took him three years to translate Garcia Marquez’s One Hundred Years of Solitude and he did such an impressive job that the writer himself thought that it was better than the original book.

She was the first English woman to translate a Spanish romantic book in the 16th century. Women translators could only translate religious literature and Margaret Tyler protested against this injustice and her words were very important in the fight for gender equality among translators. She translated Diego Ortúñez de Calahorra’s The Mirror of Princely Deeds and Knighthood.

Experts say he is “the father of English literature” and he was also a great translator. He was a philosopher, astronomer, diplomatic and author, and he also was a very good translator. He translated Le Roman De La Rose, a poem by Guillaume de Lorris and Jean de Meung, from French into English. He also knew Latin and Italian and loved to translate poems as well as to write them.

Harry Potter is one of our modern classics and a very important saga in the history of fantasy literature. Most of its readers and fans got to know the books because Lia Wyler translated them. She is from Brazil and she translated the books from English into Portuguese, giving many Brazilians the opportunity to get into the amazing world JK Rowling created. Wyler added some of her local details that made the translations even more special. She also translated books from Stephen King, Sylvia Plath and Maraget Atwood.

Lia Wyler and some Harry Potter books she translated

Claudine started her career as a meteorologist, mineralogist and chemist, but then decided to become a scientific translator. She translated a great number of scientific papers that were translated from German, Italian, English, and Swedish into French. She helped to spread scientific knowledge which contributed to improve French scientists’ work.

We have a French, English, Spanish and even Portuguese language in this list but we haven’t mentioned Japanese language yet. Seidensticker brought Yukio Mishima, Junichiro Tanizaki and Yasunari Kawabata’s work to English speakers and readers. Kabawata even won the 1968 Nobel Prize in Literature because of his translation. It was the first time a Japanese writer got that award.

The professionals and artists mentioned are just some of the translators who made history and changed our world. Their contributions helped literature and science to spread all over the globe and created thousands of new readers. Their job may be underrated but we wouldn’t be able to read the bible and other classics without them. This is just a small recognition they all deserve as they became an inspiration for many young translators.