Types of intelligence: are you word smart? - Stillman Translations 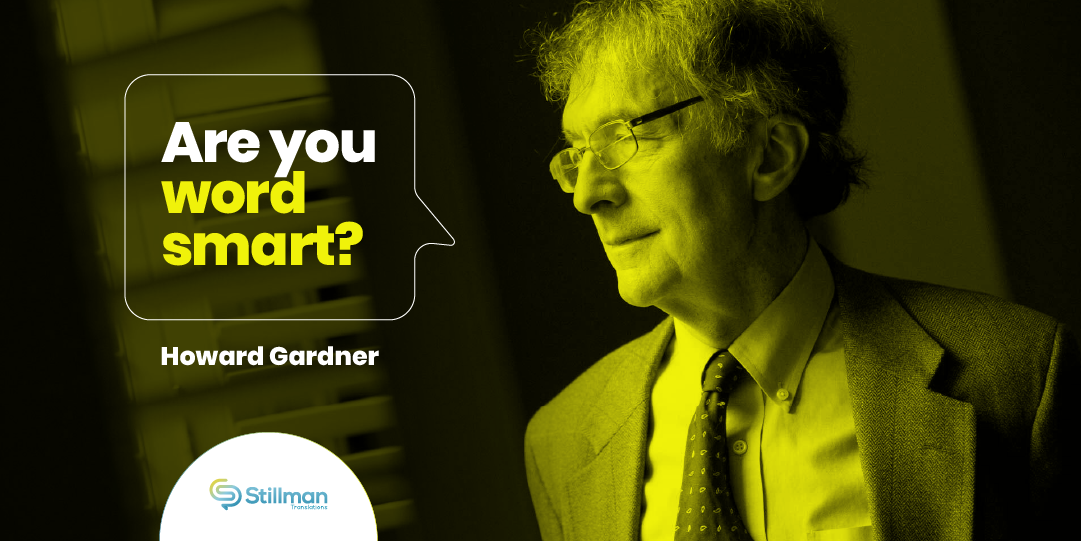 Types of intelligence: are you word smart?

There are different types of intelligence. Which do you think could be yours?

Ever heard of Howard Gardner’s 8 types of intelligence? Language is, of course, one

What does it mean to be smart? Is it being able to remember long scripts? To solve A4 sheet long equations? To know all the answers to Trivial Pursuit? The classic conception of intelligence is someone who is Book Smart. Who scored straight A’s in all school subjects. But when we pull on that thread and think about all the people we consider smart, we realize they are not all the same kind of smart. According to the Merriam-Webster dictionary, being intelligent means having or showing a high degree of mental ability.

But mental ability becomes manifest in many ways. This is why Howard Gardner, psychologist, and professor at Harvard University, created the theory of multiple intelligences. He did so in 1983 with his book “Frames of Mind” where he argued each child (therefore each person) evolves with their very own need. Some kids start walking earlier in life and can get things for themselves. Therefore they start speaking months after than the average and vice-versa. Some kids are great at sports and are very conscious of how their body moves balance and shifts. While others are great at making friends and getting people together. After some thought, he concluded there are eight basic ways that people can be considered “smart.” And he defined smart as the mind paths at which you are the strongest at acquiring new information.

The 8 types of intelligence are:

His theory underwent criticism from both psychologists and educators. The main criticism is that his definitions were still too broad. And in the end, weren’t his eight different “intelligence” simply talents, personality traits, and abilities? Could these be considered the same as intelligence?

In a way, what Gardner proposed was not so much a sturdy evidence-based empirical research, but a well overdue set of categories to analyze people in other ways. Categories that could bring out the best in more than a small group who does great in the academic world. This is why, all things standing, his theory of multiple intelligences enjoys considerable popularity with educators.

THE EIGHT TYPES, ONE BY ONE

Our specialty. It’s sometimes called “language intelligence” and appeals to those who are good at learning languages, reading, and writing. Those who are more eloquent, and fast at word plays, jokes, and storytelling. These people have sensitivity to the meaning of words, and the order amongst them. Even the sound, rhythms, inflections, and meter of words. This is why it slightly oversteps and shares a Venn diagram with musical intelligence.

It speaks of the ability to think abstractly and in multiple dimensions. Spatial reasoning and conceptualization are required in fields such as architecture, graphic design, photography, and so on. They can hold these ideas and shapes and bring them down to earth. Keep their map in multiple directions and dimensions in their head.

It describes people with an innate ability to learn different sounds. The perception of sounds, their spectrum, volumes, variations, and pitch, translates into great musical ability. This is why it’s likely people with this intelligence will have a natural ability to sing, play instruments and become world champions at Simon Says electronic games.

Athletes. This self explanatorily refers to the ability to use your body in a naturally competent way. These people have skills even with no training and effortlessly become better with them. Running down a field or passing a ball or doing handstands are as seamless as brushing their teeth.

Being “logical” refers to the ability to analyze abstract problems, carry out mathematical operations and investigate issues scientifically. So yes, these are the people who solve the A4 sheet equations we started with and we are glad to have them.

The ability to interact effectively with others. Sensitive people are smart in that way. They can perceive other people’s moods, feelings, temperaments, and motivations. It’s a valuable trait in anyone since it means they are able to understand and relate to those around them. And human power is the basis of anything we do.

It’s similar but self-oriented. Intrapersonal intelligence is a wink to introspection. having sensitivity to one’s feelings and the capacity to plan and act accordingly. Unlike the rest of the types before mentioned, it doesn’t apply to a certain industry or talent. But is extremely useful for any context, since we carry ourselves around, want it or not, anywhere we go.

People who have a “green hand” or lush gardens that endlessly grow. Those people whose grass is greener. They have naturalistic intelligence: the ability to understand the nuances in nature, including the distinction between plants, animals, and other elements of nature and life.

ZOOM IN ON WORD SMART

That being said, you will find people with linguistic-verbal intelligence on our team.

According to Dr. Klapow, linguistic intelligence is the “ability to use language in a variety of ways.” They have great timing on how and when they’ll deliver a message. With which words. To whom. They have a natural ability to use words and language to their advantage (and as a client, to yours).

They tend to have high verbal memory and tend to excel at speeches, debating, and creative writing. This is why they are known as language experts. And we have high esteem for them in what we do.

People are not, of course, necessarily just one type of smart. They can be a mix and match of two or more of this intelligence. But it’s important to identify them. If you want to learn to be exceptional at something, your best bet is to understand the unique areas of intelligence where you have an advantage and build upon those strengths.

If not, you can always hire us at Stillman to put in a good word for you.