The untranslatable words that can improve our wellbeing - Stillman Translations 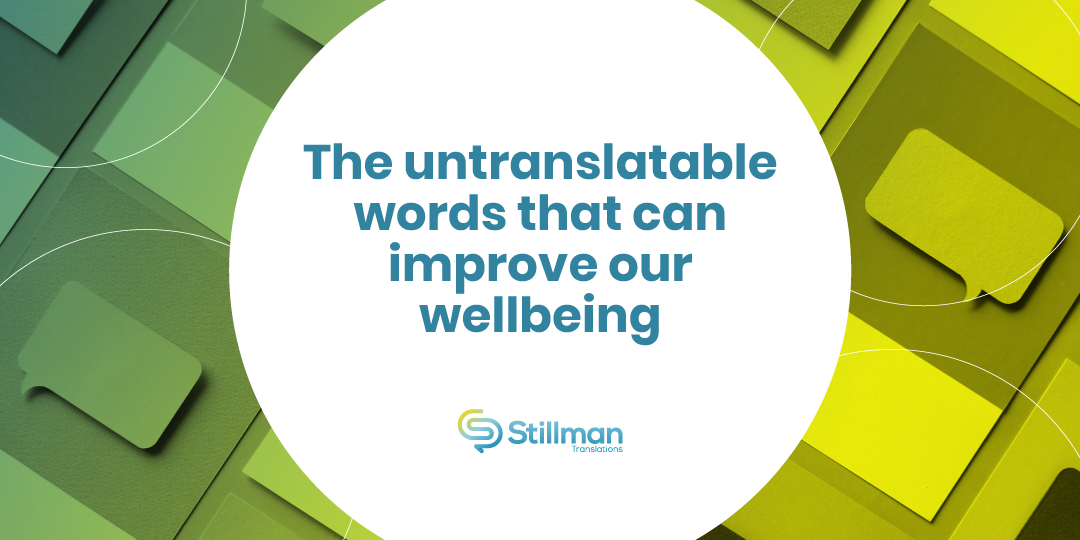 The untranslatable words that can improve our wellbeing

Psychologists since Sigmund Freud have claimed that language is the glue that holds together the complex web of experiences of being “human”. At the crossroads between psychology and linguistics, a new field of scientific discovery has found that the untranslatable words we use to name our emotions have the potential to improve our wellbeing.

The intrinsic relation between culture, emotions and language

We need words to represent our experiences, to paint an image in our minds that allows us to think of them and then communicate them. The words we use to name our emotions are one of the most interesting dimensions of this crossroads between language and wellbeing. The words we use can work as a repository of the emotions we tend to feel most often.

Let’s consider cultural stereotypes. Do you think the way you express your emotions is “the same” as those who come from the same culture? The answer to that is most likely: “no”. But if we can generally agree that it is impossible to feel exactly the same as any other person that shares our nationality or cultural background, why do we keep turning to those stereotypes?

Perhaps it has to do with the fact that members of a culture often use the same language to refer to their feelings. And so, we have formed a habit of viewing those experiences through the lens of our cultural dictionary. Language, as claimed by Jakobson and other linguists, pushes us to think in certain terms (although it doesn’t keep us from expanding our horizons beyond its dictionary).

Cultural differences determine the value we assign to certain emotions

Science has found that some cultures have a greater tendency towards individualistic worldviews, while others are more community-oriented. This, in turn, may affect the way members of those cultures would value, for example, teamwork or self-esteem, when it comes to describing their level of “happiness”.

In this sense, if you had been raised in Japan, you might consider that a feeling of “quiet tranquillity and calm serenity” – for which Japanese uses the word seijaku –  ranks quite high in your happiness scale. This is rather different from a Western notion of happiness, which involves a much more excited state of being, involving arousal and activity.

Does happiness have more to do with the notions of “joie the vivre” (joy of living) or “dolce far niente” (sweetness of doing nothing)? Or is it more about reaching “nirvana” (a state of spiritual bliss and transcendence) or “sisu” (extraordinary determination in the face of adversity)? All of the above could be correct, of course the answer you lean towards may be influenced by your culture and experiences.

A psychology of wellbeing should include all of its translations

Wouldn’t it be great if, as a species, we had the ability to tap into other cultures’ descriptions of happiness, or wellbeing? Even when positive psychology is mainly a Western-centric and English-centric field of study, recent research is aimed at exploring how incorporating a global perspective on wellbeing could create a wider variety of possibilities for happiness.

What does this mean? Positive psychology is “the scientific study of the strengths that enable individuals and communities to thrive,” as defined by the University of Pensylvannia. As a discipline, it complements traditional therapies in exploring the “good life” and increasing the ways in which life is worth living.

And, of course, language is (or, rather, languages are) at the core of this matter as well. It is in this field that research about how language is associated with our emotions has had the greatest development. Specifically, Tim Lomas from the University of East London has started a cross-cultural emotion lexicography (a little like a multilingual dictionary) that is open for all to collaborate.

A global language for wellbeing: why is it useful?

The tenet behind Lomas’ collaborative work is that, by creating a wellbeing vocabulary list that includes non-Western notions, the entire scientific community can have a broader understanding of this human experience that is not limited by cultural biases. Basically, if we understand the phenomenon by looking at all of the different ways it can be named, we are surely going to have a bigger picture in front of us.

If you are not a psychologist or a linguist, you may be wondering why any of this would be interesting or useful to you. Well, Lomas has realized that there are countless “untranslatable” words used to describe states of wellbeing around the world. By learning about them and their definitions in English, he believes one can expand one’s own field of possibilities for it.