“Sound” foreign - What does it mean? - Stillman Translations 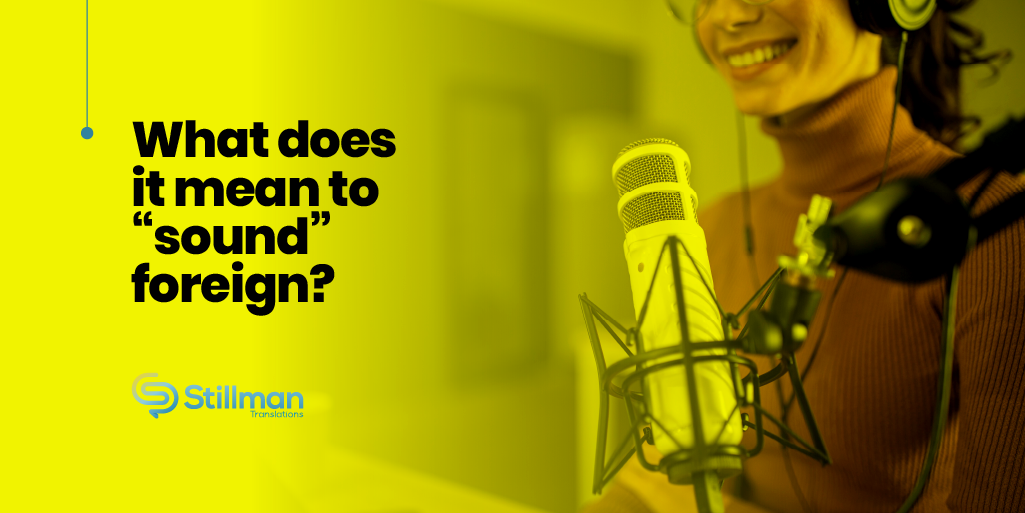 “Sound” foreign – What does it mean?

Accents respond to hard-to-define unconscious categories in our heads. Here’s what they are made up of and how to use them for good.

Photo by Sigmund on Unsplash

What does it mean to sound foreign? To sound black? To sound fancy? To sound angry?

Can you put these answers into words? Inside linguistics and tone, we can find some explanations and definitions about what it is we hear when we hear all these. It’s an intuitive and intrinsic characteristic that our senses perceive. But it’s so fast and incorporated we don’t even know we know.

Studies have shown it can take only 30 milliseconds of speech – enough to say “hello” – for listeners to identify a person’s ethnic or cultural background as being different from their own and judge and create an image of who the person they are talking to might be. If they’re trustworthy, good, bad, safe, fun, warm, etc.

John Baugh, a sociolinguist at Stanford University, decided to test this concept. He made repeated phone calls to one same newspaper apartment advertisement. He used different accents on every call. The result? An apartment that seemed to be available according to who was speaking.

And want it or not, this is something we also play with.

First things first, what is it made up from? We’ll focus on the “what does it mean to sound foreign” question as an example.

In this case, intonation plays an important role. It is variation in the spoken pitch that distinguishes the attitudes and emotions of the speaker. It signals the difference between statements and questions. And between different types of questions. And it focuses on layers of the spoken to regulate conversational interaction.

There are functions common to most languages, for example, a higher pitch will convey surprise or irony. Except in tonal languages like Chinese, where the pitch will be used to distinguish words.

But as we go deeper into languages, we can see differences that are related to each country. And how they speak and how we believe they speak. The so-called high rising terminal, where a statement ends with a high rising pitch movement, is said to be typical of younger speakers of English. And to be more widely found among young female speakers. But in French, intonation patterns differ.

Now, intonation is actually a subproduct of a larger thing called prosody. Prosody is concerned with those elements of speech that are not individual phonetic segments (vowels and consonants). It concerns larger units of speech. These include linguistic functions such as intonation, stress, and rhythm.

So the pitch of the voice (low and high), length of sounds (short and long), prominence (soft and loud), timbre (quality of sound) are the ingredients we use to analyze and measure people’s voices. We attribute all kinds of unrelated personal traits – from height to sociability, and even criminality – based on how they sound.

Margaret Thatcher, for example, used this in her favor. She swapped her Lincolnshire accent for the standard ‘received pronunciation. At the time it was thought to be more in keeping with a position of political power.

In a Quora forum, someone once asked a non-English speaking Finn to imitate English and the answer was “Ying, ing, yang, ing yang yang, ing.”

Gibberish? Maybe. But common sense gibberish: for a Finn speaker, gerunds sound very unusual and those sounds stand out. Same as for English speakers, the “back of the throat” sound in Germanic languages like Hebrew and Arabic are top of mind. Or the way the French pronounce the letter “r”’.

These are all attributes of “foreign”. This is why we can guess and imitate nationalities. But differences also appear inside nations. ​​Nicole Holliday, a linguistics professor at Pomona College in Claremont, has an interesting career in this. She studied how individuals interact with language to construct identity.

To start with, identity is something that is constructed and performed all the time. It’s not static. British English changed over the centuries. What sounds or doesn’t sound American did too. Now, what is “foreign” to us could mean another country, another ethnicity, another social class structure.

For example, African- American English speakers don’t tend to use hedges or up-talk – the thing we mentioned where our voice rises at the very end of sentences. Particularly for women, not using these sorts of strategies for politeness is often interpreted as rude or hostile, when it’s simply a different linguistic construct.

Or, for example, she explains how in an Obama rally, a man seeking funds used these variations as a strategy. She heard a man on the phone sound very serious and proper, with a high-end vocabulary and solemn tone. As soon as he hung up, a young black guy came in and asked “Yo, I wanna help out Obama”. To her surprise, the answer was a radical switch in prosody, word pick, everything. He replied: “My brother, Barack Obama could really use your help, okay, when are you free? Can you bring your homies?”.

Many people feel they are “adopting a persona” when speaking in a different language. This doesn’t make them fake. It’s actually very normal for people who grow up in bilingual and bicultural settings to adjust when switching languages.

Up to a certain point, it’s inevitable. In French, most sounds are made at the front of the mouth. In German, most are produced at the back. It’s complicated to switch from one to the other without a change in register due to the source of the sounds.

But this adjustment may also translate into lowering your register, imitating culture codes, picking from another range of words available. And something as simple as words shapes thoughts differently. One study took a group of bilingual and bicultural Hong Kongese (who could speak both Cantonese and English fluently, and who had lived in both Hong Kong and the UK), and had them fill out personality tests and participate in interviews in both languages.

It was amazing how “Western” values, such as extraversion or individuality, appeared much more predominantly in both oral and written English tests. Even self-descriptions changed consistently when switching. Completely different adjectives were chosen.

The perception of values, though, is a double-edged sword. Papers reveal that, for example, prejudice against nonstandard dialects such as African American Vernacular English (AAVE) plays in the criminal justice system. Many cases were characterized as unintelligible or not credible. And testimonies misinterpreted or mischaracterized by lawyers on all sides. All because people literally did not speak the same language. And languages carry stereotypes attached to them.

Lot’s of information to recap and apply to content strategy:

Every language has a finite set of sounds in and associated with, them. These you need to learn in order to speak like a native speaker. Multiple sounds can even be attributed to a single letter.

Prosody, the use of rhythm, pitch, intonation, and timber, add emotion, intention, and functions to the voice, person, and statements in question.

Then, cultures have internal codes, vocabulary, sounds, catchphrases, and more that build identity and are associated with certain social groups or even physical and psychological characteristics. This is why there is such a thing as “sounding” black, pretty, angry, or foreign.

And the sum of all these is a wide array of thoughts, cultural diversity, and fun exchanges, but also a source of discrimination and unjust stereotypes.

How is this related to content? This article might change your point of view on how to dub, voice-over, and more. Ask yourself what the intention of the campaign is, who do you want to reach out to. Is your content discriminatory in any way? Do you want it to be playful and mix and match these styles? Do you want to raise awareness on the topic? “Sound” smart, elegant, or local?

Then these are the elements you need to consider. At Stillman, we can help you out. Contact us.