Are hearts and I love you’s universal? - Stillman Translations 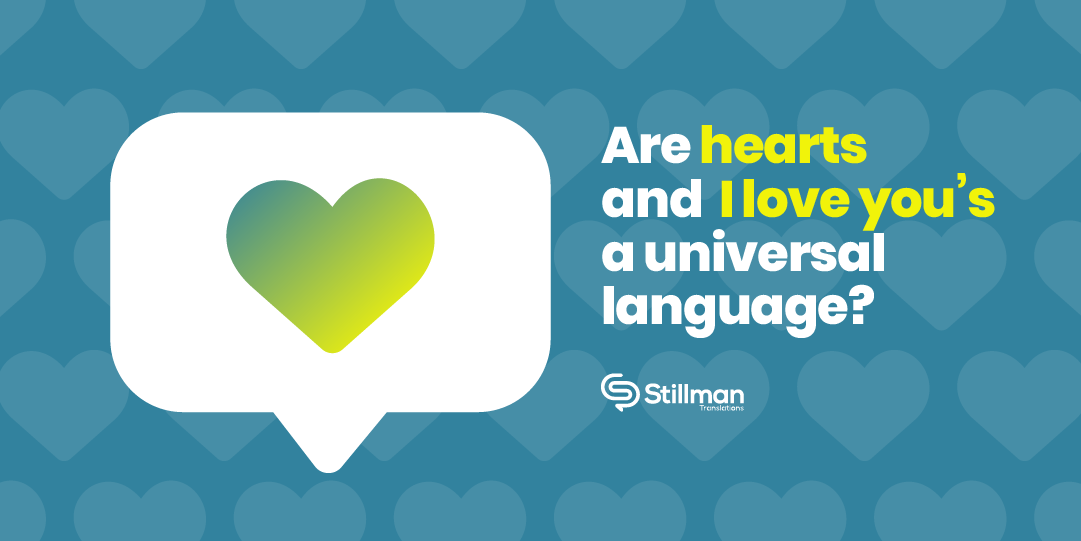 Are hearts and I love you’s universal?

From a cross-cultural study conducted by the City University of New York to the nuances between Je T’aime, I love you and “te quiero”, we’ll find out

How do we express and represent love in different cultures? And how does this impact your multimedia campaigns?

There is a very simple modus operandi to humans. We learn from what we see around us, and we replicate it as a means to function. If it worked before, it will work for me. And so we repeat certain customs, gestures, formalities, phrases. From the small stuff to big backbone-of-society material.

But Love, as we know it, seems to be one of those universal things. Something everyone feels, and we all find the need to express. But is it universal? What differences can we see in language and what do they mean? And why should you care about this when writing content? Or creating multimedia campaigns?

From a cross-cultural study conducted by the City University of New York to the nuances between Je T’aime, I love you and “te quiero”, we’ll find out.

Love and romantic love are not the same. This we know, and social scientists have been trying to coin the difference for some time now. These efforts began in the mid 20th century. Since then, scholars from disciplines such as sociology, anthropology, psychology, have greatly advanced in the theory of love and its constructs.

The main question is whether romantic love is present in all cultures and how similar attitudes towards it are. An interesting answer came in from Papua New Guinea in the ’70s. People there lived quite isolated, and so they were the perfect focus group. Researchers decided to show this foreign cultural group photographs of western faces. In turn, they managed to identify the emotional expressions at rates higher than chance.

Kristen Lindquist, an associate professor of psychology and neuroscience at the University of North Carolina at Chapel Hill, explains this can be taken as evidence that people around the world can understand emotions in the same way.

It’s not enough though. So Lindquist together with her colleagues teamed up with researchers at the Max Planck Institute for the Science of Human History in Jena, Germany, in one of the largest studies of cross-cultural emotional expression to date.

The team compared language families with common ancestral roots to understand and contrast emotion-associated vocabulary worldwide. And findings were that even though emotions have common ground, there are significant differences as to how they are conceptualized. Three times more than when we describe color.

These variations arise from two qualities: valence (how pleasant or unpleasant they are) and activation (the level of excitement they provoke). This is why joy is unlikely to be grouped in language families with regret. But Austronesian languages paired love, a typically positive emotion, with pity, a typically negative one. So there are exceptions.

This was a trampoline for all other researchers. And as is our nature, from then on people tried to categorize and deconstruct love. Psychologist John Lee, for example, presented six ways in which people love. Three primaries and three secondary forms.

1. Romance, based on “chemistry” and a strong physical attraction.

2. Conquest, used by those who see love as a game and want to “win”.

3. Friendship, based more on similar interests and a commitment rather than on passion

4. Practicality relationships with a “business-like” fashion and common goals.

6. Selflessness, where the individual is willing to sacrifice anything for their partner.

It’s a start. But a bit over-simplistic. So Tim Lomas, lecturer in Positive Psychology at the University of East London, later found at least 14 distinct different kinds of love from analyzing 50 languages. 609 relevant words were identified and organized into 14 forms or ‘flavors’ of love. This expanded theoretical treatment lets us appreciate the nuances of what seemed a simple yet turned out to be a very polysemous concept.

WHAT DOES “I LOVE YOU” MEAN IN EACH COUNTRY?

It gets more and more technical from here. “An Exploratory Study on the Use of I Love You in the American Context” and “Emotion expression and the locution ‘‘I love you’’: A cross-cultural study” are only two of the many studies dedicated to this question.

According to the first essay, “I love you” is a very American thing. The United States uses the expression more than any other country with about 75% of Americans saying it at least once each day. And in the anglophone world in general, “I love you” is listed 59 among the top 250 most used English phrases. Not to mention the word love ranks 401 among the 5,000 most used words in contemporary American English.

But when do we use these expressions so much? Well, the second study says it is used most in couples (62%). Followed by parents (40%) and grandparents (38%) with their children or grandchildren. Also, amongst friends, the phrase was shared occasionally. Though when it comes to neighbors and co-workers the most common answer was “Never”.

But what’s incredibly interesting, is that for those who spoke English but English is not their native language, 67% said they chose to say “I love you” in English as a conscious choice.

Still, the weight given to the expression changes considerably.

Youtubers Rachel and Jun, an interracial couple based in Japan, point out that they don’t live in a very verbally affectionate country. And that instead, Love is more about actions than words.

Rachel and Jun “Saying I Love You” video

What’s more, they tend to be somewhat shocked at anime translations. Many times characters say I love you when it’s not what they said originally. For them, it’s too much. It’s weird.

Is it a wrong translation? In a way, no. Because even though it’s not loyal to its original copy. It does translate the intention for a culture that needs the externalization of the main character’s feelings to fully understand.

In the same manner, some languages have middle steps. Like Spanish. You don’t go from “I care” to “I love”. They have “te quiero”. Querer is a verb that means “to want”, but is also the mild version of “I love you”. It is used with friends, people we care for, family, and when you start dating someone since I love you may be deemed too emotionally charged.

WHAT DO MULTIMEDIA CAMPAIGNS HAVE TO DO WITH ANYTHING

Well, even though all of this may seem like a long overanalyzed rant meant only for professionals in related fields of study, it’s not. For language professionals, knowing that in Tamil alone there are more than 50 words that mean love, is exhilarating. But it says more about the people who speak Tamil than the language professionals’ curiosity.

These concepts are embedded in our day-to-day life. The cartoon character skunk Pepe Le Pu’s overt romantic disposition makes fun of a French tendency to public displays of affection. While in Japan, even though they are a definite no-no, it’s extremely common for women to create elaborate packed lunches to show affection for their loved ones. And they, in turn, might show off this open display of affection in the shape of food.

Contact us and get to know up close everything we’re capable of.