The stories behind English words used at Christmas - Stillman Translations 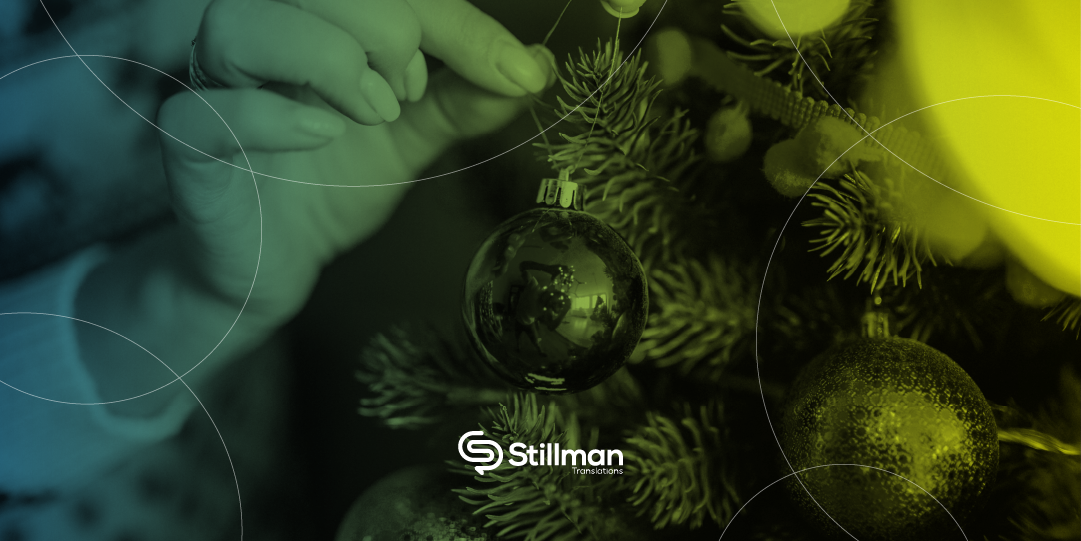 The stories behind English words used at Christmas

As hard to wrap our minds around the fact as it may be, the festive season is almost here. Christmas plans start to become a common topic in conversations, thankfully stealing some of COVID-19’s spotlight. In this article, we dive into the birth of the words we use to talk about Christmas.

Latin is the root of modern Christian words

As with all things related to Christian tradition, the influence of Latin is present in many words surrounding Christmas. Latin was the language of the Roman Empire, which had converted to Christianism by the time it had reached the furthest conquered territories.

According to the Catholic Encyclopedia, the word Christmas originates from the phrase “Cristes Maesse”, first recorded in 1038, which means the Mass of Christ or Christ’s Mass. The word mass is the English version of the Latin word missa, a celebration of the Eucharist, done in memory of Jesus Christ, where Christians eat bread and drink wine. But not all is Latin; in fact, the word Christ comes from the Greek word Khristos, translated from the Hebrew term messiah, which means anointed.

The word festive comes from the Latin term for feast: festivus. It originally meant joyous, gay and merry. It is also related to festum which means festival or holiday.  Advent originates from the Latin adventus, a term for arrival or approach, referring to the coming of Christ. Thank you Latin!

Nativity also comes from a Latin family of words: nativus, nativitas, nativitatem, referring to being born and birth. The word made its way to English via French influence, probably during the Norman Conquest of the British Isles, during the 11th century.

The word carol appears to have its roots in the Latin term choraula, also in the root of choral as it referred to a musician who accompanies a chorus by playing a reed instrument (a type of flute). The world carol was used in medieval times to refer to a dance carried out in circles, usually performed during pagan celebrations. It was a type of folk music that Christians later adapted to religious themes, thus becoming the Christmas carol we know today.

The English and Irish tradition of having plum pudding at Christmas was carried across the Atlantic and spread out in the “colonies.” Some historians believe that Christmas pudding traditionally had thirteen ingredients, one for Christ and one for each of the Apostles. But current recipes are much simpler.

American lexicographer Noah Webster defined plum pudding as “pudding containing raisins or currants.” The contradictory part of this story is that “pudding” wasn’t originally used to refer to desert but to a mix of meet, spices and blood, that was boiled after being stuffed in the animal’s intestines. But the word meandered along history, eventually becoming associated with rich, sweet foods. Plum pudding is one of such sweet examples, where the word plum refers to the raisins or currants that give it sweetness.

A traditional eggnog recipe includes rum, Bourbon or cognac (sometimes more than one), milk or cream, sugar, raw eggs and spices.  For an extra frothy texture, some recipes involve whipping the egg whites separately. Eggnog became traditionally associated with Christmas because of its spicy flavor, including vanilla, nutmeg and sometimes cloves.

The word is believed to have been first used in writing circa 1775, by American priest and philologist Jonathan Boucher. He had a Glossary of Archaic and Provincial Words where he defined eggnog as “a heavy and unwholesome, but not unpalatable, strong drink, made of rum beaten up with the yolks of raw eggs.”

The term sugarplum was first used to describe a method for fruit preservation – boiling fruit with sugar –  and it slowly became the general term for what we currently know as candy. In fact, sugarplum is not a plum at all, but a series of layers of hardened sugar, in a round or oval shape. The word quickly became associated with Christmas because of poems and plays. If you have ever watched The Nutcracker by Tchaikovsky, you are familiar with the Sugar Plum Fairy, who rules The Land of the Sweets.

Santa and the present tradition were born in Turkey

The name Santa Claus refers to Saint Nicholas the saint patron of Children because, who was born in present-day Turkey around the year 280. As a young man who had lost both his parents, he decided to give away his inheritance to help the poor and he later became a clergyman. The tradition of giving presents to emulate him became popular in Northern Europe until the 1500s, thanks to his reputation for performing miracles. Dutch settlers, who had nicknamed him Sinterklaas, carried the term to the USA, where the word slowly turned into Santa Claus. This is a word that has truly traveled the world, bringing tradition and meaning everywhere it went!

Crèche is defined as “representation of the Nativity” by Merriam-Webster and it is a French term. Before its current form, the word was sometimes spelled as cratch or crache. All of these forms originally referred to a trough from where animals eat. In case you are unfamiliar with the biblical story, this is where baby Jesus was first laid to rest after his birth, as the scene took place in a stable. Interestingly, the feeding container was eventually named manger, which is its current meaning in English. In its original French, manger however means to eat. In summary, we use: a) the French word for cradle to speak about the Nativity and b) the French term for eating to refer to a feeding box for animals.