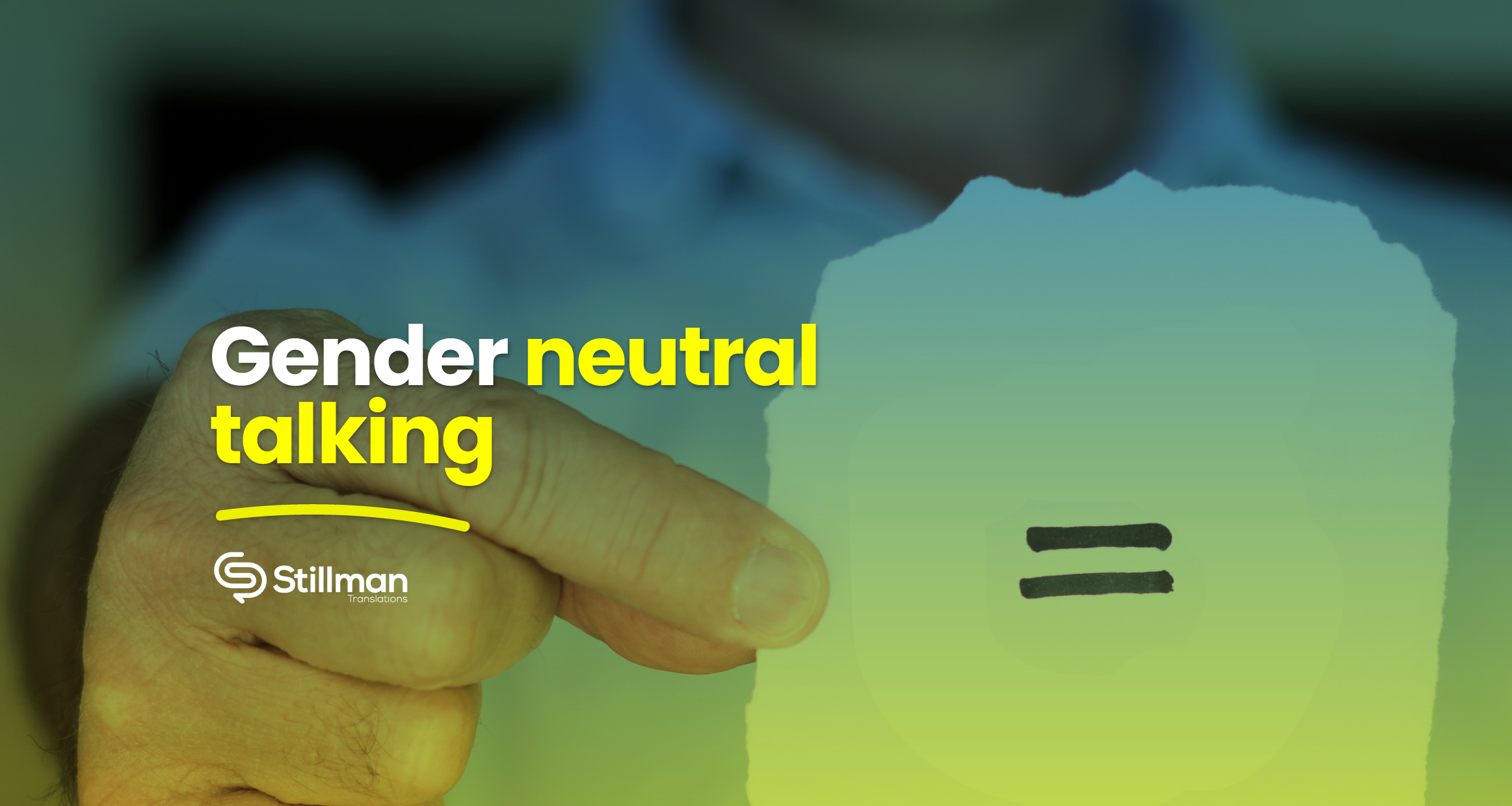 We’ll explore how gender plays out in different languages, different solutions that have risen at national levels, and measures taken at a corporate level.

How and why it’s done in different languages and organizations

Some languages, like Chinese and Persian, don’t assign nouns a gender or already have a gender-neutral form for people built in. English has a similar attribute, but don’t be fooled, we’ll get into many cases where that proves itself untrue. But some languages possess grammar that is traditionally based on exclusively male or female options. Which, by the way, makes it a very binary choice, aside from reinforcing stereotypes on what is masculine and what is feminine.

In this article we’ll explore how gender plays out in different languages, different solutions that have risen at regional and national levels, and measures taken at a corporate level.

How gender is embedded in languages

In 2019 the Merriam-Webster dictionary added “they”  as the pronoun to use for a “single person whose gender identity is nonbinary.” Why? What does this mean?

When we’re talking about language, “gender” can have at least two meanings:

When language is gendered, words make explicit reference to people’s genders. It has its roots and causes, but in hindsight, more than one has started questioning if that explicit reference has become needless, or obsolete. For example, gentlemen, policemen, stewardesses. In some cases, these came to a natural middle ground and have been replaced with for example flight attendant, firefighter, folks, and so on.

There is also a difference between gender neutral and “neopronouns”. The example from Mirriam Webster we started with, is a neopronouns, and they are actually a subcategory inside gender neutral. Because they are new, people usually share their pronouns by giving more than one word, like they/them/themself, to provide people who are new to the lingo, an array of options. You may have seen this before.

This gets even more evident in languages like Spanish, that have feminine and masculine cases added to all nouns. The word “the” itself translates to male (el) or female (la). So alternatives like using “x” to create a gender-neutral noun became popular. You would read Latinx instead of Latino or Latina.

Arabic is another grammatically gendered language, with each verb, noun and adjective always assigned either a male or female case. The male is the default in plurals, even if it’s just one male in an otherwise female group. Modern standard Arabic on the other hand, has a dual option for nouns and verbs that doesn’t imply a specific gender. Some people therefore use the dual of they and you — “huma” and “intuma” — as a gender-neutral alternative.

Gender-neutral, then, is simply a way of talking about people without assuming their gender. It made its way into the international agenda because some started to read in between the lines, and found that biases, stereotypes, and social struggles sprouted from something as small, and as big, as language.

In 2011, a study in the Journal of Personality and Social Psychology  revealed that the description of STEM industry jobs overwhelmingly used words that are associated with male characteristics, including: ‘confidence’, ‘decision’ and ‘logical’.

This started in the 1970s, when the field of linguistics began to explore how language mirrors and shapes thought. Fast forward all the way back to 2022, and teens in South America are leading the charge to eliminate gender in their language. Young people are changing the way they speak by replacing the masculine “o” or the feminine “a” with the gender-neutral “e” in certain words. The “x” found itself limited to written format, so “e” came to conquer the oral sphere.

But lately, this worry has made its way to the formal international agenda. It’s no longer something people informally do, but something that nations are starting to implement. In January 2019, Hanover became the first German city to mandate that all official communication, such as emails, fliers and forms, use gender-neutral nouns. Instead of using the word for a male voter (wähler) and a female voter (wählerin), the municipality would instead use voting person (wählende).

But it’s not black or white. Life is one big gray area. The European Parliament was one of the first institutions to adopt guidelines on gender-neutral language in 2008. But it also emphasized the importance of clarity and precision when writing legislation. Therefore make an exception to this adoption in cases when it will create ambiguity or infringe on the ability of people to understand, translate or interpret the text.

Sweden is too a case study for slow but effective change. They all together created a new pronoun: ‘hen’. It came to be in informal settings in the 1960s but can now be found in national newspapers, official texts, court rulings and literature. Studies by the National Academy of Sciences found this shift reduced bias towards traditional gender roles and improved gender representation.

On the job experience

Logically, companies couldn’t look the other way. No one is oblivious of the change and debate going on at this very moment. Depending on the country, being gender neutral without recurring to neopronouns is easier or carries its hardships. Depending on the company, industry and personal style of the organization, we will find more radical views or conservative stands. But all of them, in one way or another, address the matter.

Hotjar has an inspiring social experiment shared on their site. They work remotely, like many do today, specially in post pandemic. But building a shared and inclusive culture is still a priority, no matter the distance. Given the circumstances, it requires a conscious effort.

They recognize that language is part of it. At some point, a team member raised their hand about how the salute “hey guys”, or “guys” as a call of attention, was very frequent. And even though it seemed tiny, they felt excluded from the conversation.

Long story short, they tested this out. They created a ‘guys’ jar and for a month, wherever said guys (in the wrong context) had to put a euro in the jar. This would extend for 30 days.

The result was an absurd amount of money in the jar, and the realization that wow, maybe it was a bigger thing than they thought at first. After a month of being acutely aware, the ‘guys’ challenge brought on more care and empathy towards others.

What other shapes can this uneven distribution of gender in language take?

Spotlighting occurs when the use of an adjective draws attention to a role adoption that challenges a gender role. For example “male nurse” or “career woman”. It can be a double edged sword: defy status quo in a combative way, or reinforce tradition.

Differential naming is a common practice where males are referred to by adults’ titles, while females may be referred to by pre-adult titles. For example: Mr Smith, the men from accounts and the girls from marketing want to see you.

Featurism is where something such as appearance is focused on in women but not in men. This trivializes and demeans the contribution of women. For example: “John and Mary gave a speech yesterday. He was very eloquent, and she looked so nice!”

Being more aware is tricky. Being aware in a language that is not your own, and understanding the consequences of which alternative you decide to go for, is very hard. Luckily, you can always count on us at Stillman.

If you would like to learn more topics about communication, you can read “Hate speech: a multilingual problem for interpretetion”