Machine translation: everything you need to know - Stillman Translations 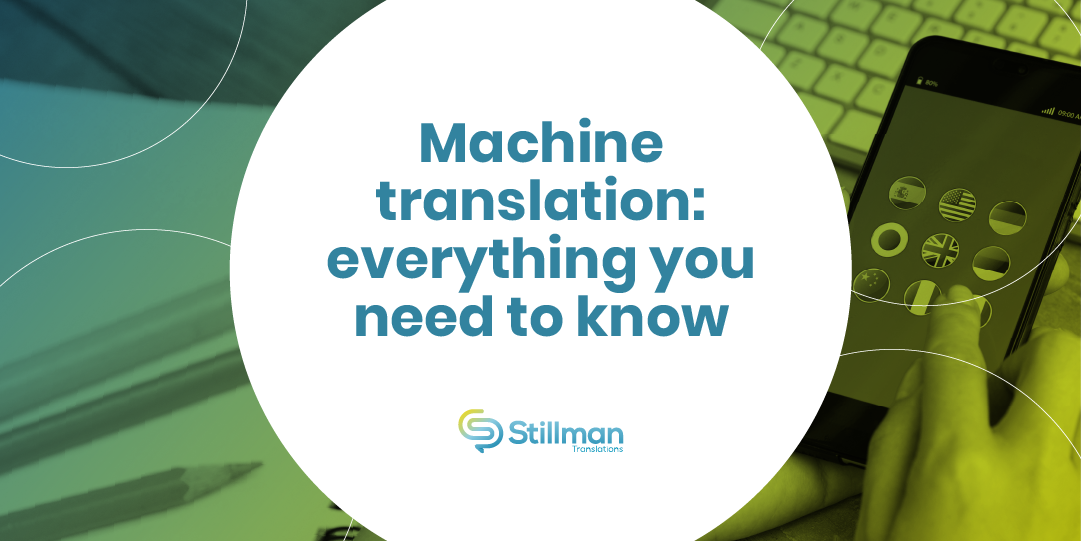 Machine translation: everything you need to know

Machine translation is becoming more and more popular, it is used as a predilect way to complement human translation processes. It can be understood as a form of computational linguistics and language engineering. It is an automated process, carried out by a computer, not a human, where the software translates the text or speech from one language to another.

How does machine translation work?

For this reason, the software used for machine translation is being constantly improved and updated, so translations become as accurate as possible. As an example, corpus statistical and neural techniques are being implemented to ensure improved output quality.

Machine translation can be trained by human intervention. A concept that is growing in popularity is “Adaptive Machine Translation”. Adaptive MT is a new technology that allows MT systems to learn from correction input, almost immediately. In this case, training is not required, because the system learns instantly from thepost-editor’s corrections. This is how it works: when you are translating while connected with the machine translator system, that system can learn  specific ways of interpreting things. This improves the quality of the results.

The two most common machine translation engines are Rule based and Statistical. They differ in the way they process and analyze content, but they are often combined in the same system, known as Hybrid MT.

Rule based machine translation (RBMT) uses linguistic information about source and target languages. It is used most commonly for the creation of dictionaries and grammar programs. RBMT uses linguist rules to break down the content and produces more predictable output for terminology. Rule based engines don’t require a bilingual corpus to create the translation system.

Statistical machine translation (SMT) generates translations using statistical methods and models based on bilingual text corpora, such as the Canadian Hansard corpus or the record of the European Parliament. Statistical engines don´t analyze text based on language rules. Rather, they are built by analyzing bilingual corpus. This method requires a large volume of bilingual content.

Example-based machine translation is a method of machine translation that uses a bilingual corpus with parallel texts as its main knowledge base at run-time. It is essentially a translation by analogy and can be viewed as an implementation of a case-based reasoning approach to machine learning. According to Hutchins, in its original conception EBMT seems to have been regarded primarily as a means of overcoming the deficiencies of RBMT systems, namely their weaknesses when translating between languages of greatly differing structures, such as English and Japanese.

Between 2016 and 2017, more data was created than in the whole of human history prior. Since 2013, companies like Google and Microsoft started testing and developing the use of neural networks.  Neural networks are statistical learning models, that were first used in speech and image recognition technology. Neural networks enable MT engines to train themselves, through a process similar to the way the brain works: through trial and error (which is called deep learning).

So, in conclusion, machine translation is growing and big companies counting on its perfection. So, do we need machine translation? Of course, as translators this can sound a bit odd. Human translations can’t and mustn’t be replaced, because we are humans and we use language to approach each other in ways machines cannot understand. For example, emotions can’t be interpreted by machines. Regardless, MT can be particularly useful to support human translation and to accelerate processes.