5 common mistakes when it comes to translation - Stillman Translations 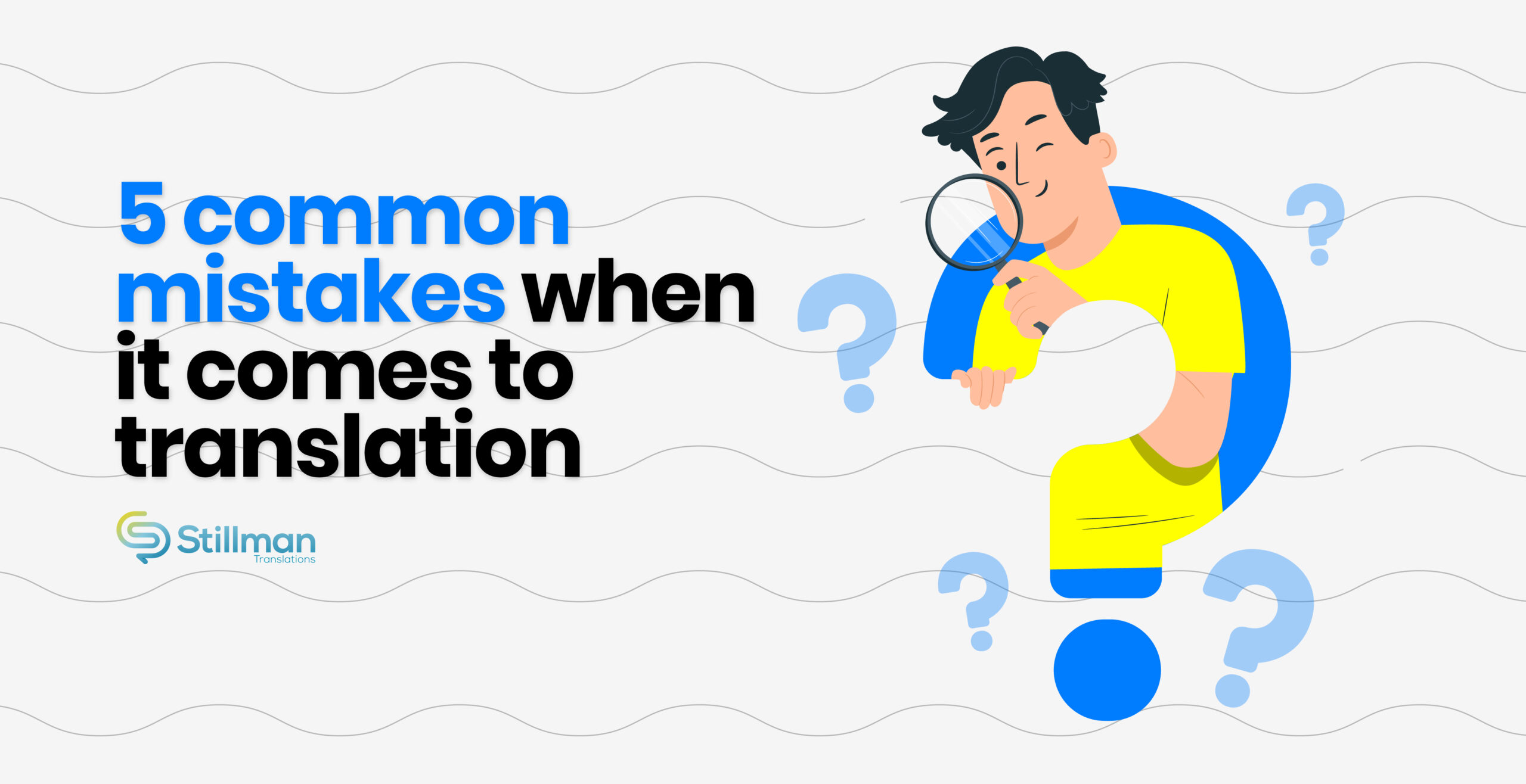 5 common mistakes when it comes to translation

Which are they and how to avoid them. Not translating to the local market. Skimping on the post-editing. Confusing machine translation (MT) and computer assisted translation (CAT).

Which are they and how to avoid them

“The translator can also do the proofreading”

“We have to translate to English, so anyone from the US, europe or related countries will do”

“Machine translation can do the job faster, there’s no need”.

These are all very innocent premises that lead to serious mistakes. We believe anyone who knows a foreign language can translate. They have the knowledge, right? Why wouldn’t they be able to?

Yet, after analyzing two seasons of a Netflix show with Spanish subtitles, more than 40 translation errors were found. Among them, 26.7% were errors in meaning, 33.3% were undertranslations, 22.2% were omissions and 17.8% were overtranslations.

Clearly, there’s more to translating than just knowing the language. Let’s unravel this.

5 common mistakes when it comes to translation

1 Not translating to the local market

Languages are not unidimensional. The same word can have a different connotation depending on the country, city or town. There is usually no such thing as a synonym, in its purest definition. Even speech patterns and idioms change.  Figurative speech tends to not translate well from one location to another even within the same language. Take US and British English. And compare England with Ireland or Scotland. Brazilian and European Portuguese are two worlds apart. And Spanish can radically change as you go down Latin America.

So it’s not enough, if you’re going global, to simply “translate to English” or Spanish or whichever you choose. You must contemplate your audience and where they come from if you want them to feel familiar and connected to your content.

2 Skimping on the post-editing

Hiring a translator is not enough. You need someone to proofread. And this doesn’t speak badly of the translator. That person is too close to the document in question. If the presence of even the slightest typo is a risk (such as in legal documents), you should hire a second pair of eyes.

A complete post-edit will catch the errors, which can be many and so so sneaky. For example:

Homophones: words that sound the same but are different in meaning or spelling, are most likely not equal in other languages.For example, the word date, which could refer both to a meeting and to the day it is scheduled, doesn’t translate in Spanish. In Spanish there are two words: “cita” for a date, “fecha” for the calendar date.

False Friends: or false cognates. Words that look similar to English words but have a different meaning. For example, “embarazada” means “pregnant” not “embarrased” in spanish.

Word order: most French adjectives go after the noun they describe, while in English it’s the other way around.

Typos: no need to explain that. But it happens to the best of us.

The translation might be technically correct. But if the nuance changes, so does the meaning of the sentence. Maybe to the point that it loses sense.

You should always, first and foremost, ensure your purpose comes across in the translation. This weighs more heavily depending on the industry. With entertainment, literature and advertising, it’s pretty key. Keeping the right tone is important. Even punctuations can make the difference.

The aforementioned undertranslation and overtranslation are forms of unpolished language intent. Two sides of the same coin. Undertranslation means conveying less than the source document. Omitting or oversimplifying, without compensating the loss of meaning in any way. While overtranslation is adding something that was not present in the source text. Sometimes putting words in the author’s mouth that they never meant to say.

Language experts are not oblivious to technology. They use it in their favor. Technology saves them time so they can do a more personalized job and speed the translation process. Which both saves money and increases quality.

Numbers seem like a safe space when it comes to translation. A five is a five no matter the language. But is it?

Formats can vary from country to country. Values, figures, statistics, and any numerical information like currency, dates, times, doses, can vary significantly. In the United States, commas separate numbers into groups of three to make them easier to read. In Spanish commas introduce decimals, and separations are done by periods.

Also, a “milliard” in French is “billion” in English. You can see that erroneously translating “milliard” to “million” could have serious consequences.

Some topics require familiarity. If the person will be dealing with technical jargon, complex concepts, or multilayered meaning texts such as in literary works, it’s better to get a hold on someone who knows their game. There are experts in legal documents. In healthcare paperwork. Film scripts. You name it.

We have a team of highly qualified experts for each task. Meet them at.stillmantranslations.com.

If you would like to learn more about this topic go to “QUALITY MULTILINGUAL CUSTOMER SUPPORT, WITHOUT GOING CRAZY”